Most Kenyans are Christians only by profession, says Maraga 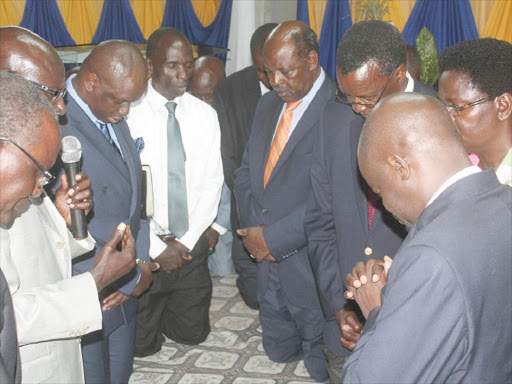 Most Kenyans are Christians "only by profession", the Chief Justice has said, noting authenticity is required for the state of affairs to change.

Maraga said that this change will take place only if people practice true Christianity.

is sad that a country boasts of 80 per cent of its population being christian yet it is common knowledge that corruption is a pandemic," he said.

Maraga acknowledged that human beings are not naturally honest but noted that leadership based on integrity cannot come from the prowess of a mere mortal.

"In my humble view, such leadership can only come from one, whatever his religion, in the innermost of whom is the fear of God; one who constantly seeks to do the will of God in the discharge of his or her mandate."

He spoke at Kenya University in Nairobi on Monday

during the Being a Leader Workshop.

Maraga accused the Judiciary and the political class of portraying a leadership that "preaches water but drinks wine".

He said there is a need for conferences and training which inspire confidence and profoundly impact societal affairs, while emphasising that leadership is not inherited.

"Great leadership is a result of an avowment to do what our respective consciences, grounded on the virtue of integrity, tell us is right," he said.

"As leaders, we can only achieve if we live out the values we endeavor to pass on. We cannot make any headway if we purport to preach water while drinking wine."

Maraga also said Kenya's leadership is on trial despite its many administration degree programmes.