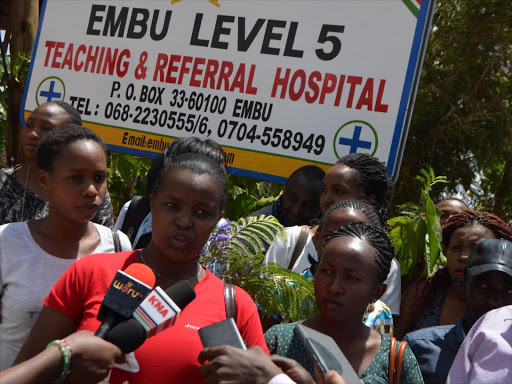 More than 40 nurses employed under contracts in Embu have gone on strike demanding to be employed permanently.

They blamed the county for ignoring them for five years despite recruiting three times.

Most of them are attached to the Embu Level Five Teaching and Referral Hospital.

They said they will stay away from work until the County health department gives them permanent and pensionable terms like the others.

The nurses led by Kayzia Njeru and Harrison Njagi claimed that they had never been considered despite qualifying for the jobs.

"Only a few nurses with the support of clinical officers and doctors were available to attend to patients in the wards," Keyzia said.

They said the department had in 2014 assured them that they would be given priority when job opportunities arise but that has not been happening.

“Employment here is selective. Even as we speak, recruitments for nurses are ongoing. We are watching to see what will happen and we demand that we be considered,” Njeru said.

Njagi claimed that NHIF and NSSF deductions have not been remitted for several months making them unable to access such services.

Post a comment
WATCH: The latest videos from the Star
by Reuben Githinji, @githinjireuben,
News
19 February 2018 - 18:00
Read The E-Paper