We have right to complain about 'rogue, biased' Judiciary - Uhuru's party 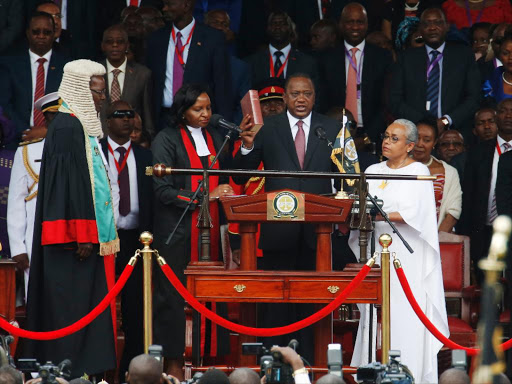 President Uhuru Kenyatta accompanied by his wife Margaret Kenyatta takes oath of office for his second term as chief justice David Maraga and registrar of the judiciary Ann Amadi looks on at the Kasarani stadium Nov 28 2017. Photo/Monicah Mwangi

Jubilee Party has noted its right to complain about a "rogue" Judiciary, saying some sections are "biased" against it.

Jubilee said some of the members of the Judiciary are always ready to protect the Opposition whenever it breaks the law, but never do the same for

"Whenever Jubilee or GoK is perceived to have broken the law, it rains fury, but clearly the same standards do not apply to the Opposition," it wrote.

"Sections of the Judiciary are biased against Jubilee. We have no capacity to issue or implement any threats. That is why we do not, but we do have the right to complain against unjust orders and rulings."

The party noted that when National Super Alliance leader Raila Odinga was sworn-in as the People's President on January 30, Chief Justice David

"When the NRM illegally swore-in their leaders, we were told the CJ could not comment on the matter lest it landed on his desk. But he went ahead to comment on the Miguna issue even though it was alive in court."

Lawyer Miguna Miguna stamped documents during Raila's ceremony and was deported to Canada for this reason.

His passports were also seized in police and court drama that lasted about five days. Police bosses defied orders to take the National Resistance Movement general to court and release him from custody.

Following the defiance, Maraga noted in a press conference that all Kenyans must respect and adhere to all court orders.

He accused the CJ and the Judiciary of partiality, singling out decisions that have worked in Nasa's favour.

In his response to the developments, Mutunga said the move reflected "arrogance of power and utter disrespect of the institution of the Chief Justice as head of the Judiciary".

Uhuru has been seen as stamping his authority through moves following his swearing-in for the second term on November 28.

On February 14, he dropped Attorney General Githu Muigai and demoted Solicitor General Njee Muturi in changes that ultimately target the Supreme Court and the Judiciary in general.

Githu was replaced by Appeal Court President Mwangi Kihara while Njee's position was taken by lawyer Kennedy Ogetto, who was part of Uhuru's ICC legal team.

But it is the nomination of three members to the Judicial Service Commission that signaled the President's intention to live up to his threat to revisit the Judiciary.