Miguna is Luo king in waiting, will take over from Raila - Mutahi Ngunyi 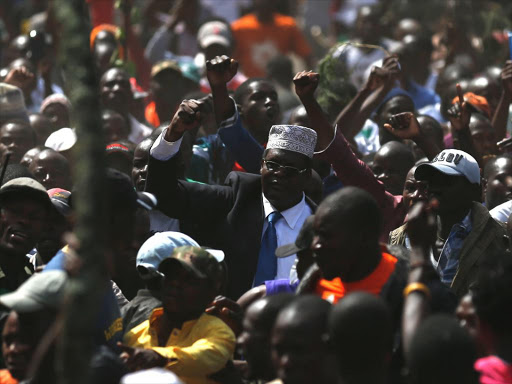 Leader of the NRM wing of the NASA Coalition Miguna Miguna arrives at the swearing in of Raila Odinga at Uhuru Park in Nairobi on January 30, 2018. /JACK OWUOR

He wrote on his Twitter page on Tuesday night following Miguna's dramatic arrest and forced departure to Canada.

From his home there, the lawyer

asked his supporters not to be shaken by what the government did to him, but to rather have a resolve that is unshaken.

Miguna paid the deportation price for stamping documents during Nasa leader Raila Odinga's swearing-in as the People's President on January 30.

He has moved to court arguing that his citizenship by birth cannot be revoked but Judge Chacha Mwita refused to lift the deportation order.

Miguna 'another RAO' in the making

Jeremiah Ominde, one of the Twitter users who responded to Ngunyi's message, said it is only in Kenya that political drama leads to success

"So Miguna got some political bonga points (directly translates to 'talking points')," he said.

John Mbadi is Suba South and ODM's national chairman while James Orengo is Siaya Senator and a lawyer who represents many politicians in the National Super Alliance.

Ababu Namwamba is the former Budalang'i MP once seen as Opposition leader Raila Odinga's righthand. He quit the Opposition saying Raila had failed him as a mentor.

She added that the lawyer will crush the Odinga family and its followers.

A user identified as Mugo said people in ODM, Cord, Nasa and the National Resistance Movement are "so scared" by the thought that Miguna will be the heir.

Ayubalolo noted: "The Luo nation needs to move forward and the only way to do so is by wrestling the leadership from RAO. The man to do that is MM."

"I saw that coming. Miguna has grabbed the mantle. 'Elijah Odinga' does not hand it over on a silver platter. Miguna has to grab it."

One Haashimyibnsaha noted that the self-declared NRM general is known for his bravery and courage when debating matters of national concern.

"He can be another RAO if he only stops [using] the harsh words he uses when addressing his opponents.

He is very articulate and says things as they are without fear or favour. He is a hero for many."

'@CnNyce' said Miguna is gaining ground, especially considering the media coverage he got following the swearing-in.

may end up being a political kingpin as long as he plays his cards right and prays for wisdom while speaking."

But others were of the view that Miguna is a "mere interference" in the Luo community's affairs.

"It is interesting that you have transformed into a prophet. Kindly, could you predict when we should expect rain instead of spending your useful time thinking of who should be the next Luo king? Water levels at Kindaruma Dam are at a record low. Luos need leaders, not kings," Dennis Opiyo told Ngunyi.

One Opiyo dismissed the analyst's remarks as childish and asked how Miguna will 'inherit Raila' while deported.

"Please help me understand this,"

John Mbindyo added: "Inherit really? I thought you understood politics. Did Raila inherit or work for it?"

The veteran Opposition leader has been the enigma of the community and the country as a whole.

evokes mixed emotions in Kenya - he is loved and loathed in equal measure. No politician divides opinion like him.

To his supporters, he is a Democrat who has sacrificed a lot in his fight against dictatorship but others see him as a scheming and selfish person, who will do anything to gain power.

His strongest following is among his Luo community in Nyanza, where he was born and went to school.

They have given him several nicknames over the years, including Tinga (tractor), Agwambo (act of god) and Baba (father).