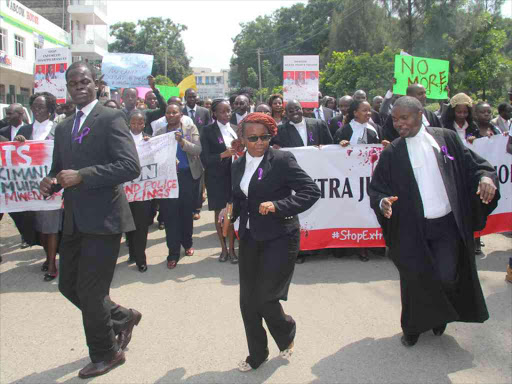 Lawyers in Nakuru during a demo protesting the killing of Willie Kimani, a lawyer who was murdered by AP police

Lawyers on Sunday called off their planned weeklong court boycotts that had been scheduled to kick off on Monday.

“Upon further consultation it has been decided that the campaign shall proceed with all components save for the court boycott which stands postponed for now to facilitate better preparation,” he said.

Okero had on Saturday said lawyers across the country would keep away from court sessions save for election petitions.

He clarified that the Yellow Ribbon campaign will go on as planned.

The campaign will see lawyers wear yellow ribbons to show displeasure with government’s open disregard to court processes and contravention of the Constitution.

They will also hold peaceful protests on Friday and file court proceedings against State officers seen to have acted with impunity in regards to court processes.

This includes suing the State for damages on behalf of KTN, NTV and Citizen TV which were switched off on January 30 for televising NASA leader Raila Odinga’s swearing-in ceremony.

Okero said the preparation of the Yellow Ribbon Memorandum is also still on the cards.

This is not the first time lawyers are teaming up to protest against acts of impunity against the government.

In June 2016, lawyers held protests to condemn the murder of human rights lawyer Willie Kimani who was allegedly mudered by police officers.

Recently after the deportation of Miguna Miguna to Canada, lawyers showed up in court donned in purple ribbons in solidarity with the vocal pro-opposition lawyer.

They condemned his deportation which they said was illegal and did not follow the right legal channels.

Prior to his deportation, the government disobeyed several court orders

to release him on bond or

produce him in court.