Miguna is a Canadian political refugee, not Kenyan, says Kihalangwa 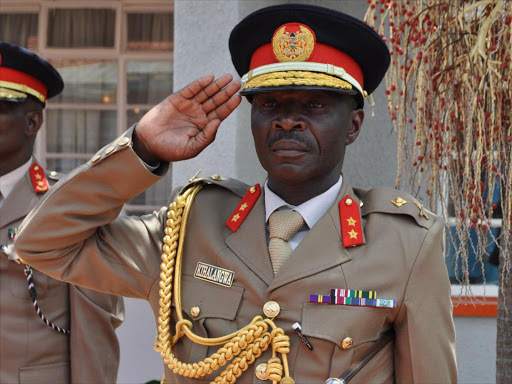 The Department of Immigration has maintained that lawyer Miguna Miguna, who was deported on Tuesday night, is a Canadian and not a Kenyan.

Director Gordon Kihalangwa, in his affidavit which was ordered by the court on Wednesday, says Miguna had fled the country as a political refugee.

He further avers that the lawyer, who was arrested for his role in Raila Odinga January 30 oath, was illegally issued a passport when he was the former PM's advisor.

The immigration boss further states that though Miguna was born on December 31, 1962 in Nyando, Kisumu, he fled to Ottawa in Canada as a political refugee.

According to Kihalangwa, Miguna applied for a Kenyan passport in 1987 to enable him travel to Havana, Cuba for the 15th Congress of International Union of Students and the World Student Conference as a student leader.

"The request was, however, rejected and in December same year the department wrote back to Miguna informing him of the decision."

In 1992, he said Miguna wrote to Kenya High Commission in Ottawa requesting him to intervene and issue him with a Kenyan passport.

In his letter to the ambassador, it is said Miguna stated that he fled the country in 1998 as a political refugee and that he travelled to Canada without a Kenyan passport since his request for one had been declined in 1987.

"The applicant in 2009 made another application for a Kenyan passport at the Kisumu passport control office. Upon receipt of the application, the late Gerald Kajwang, who was then minister in charge of immigration, approved that a duplicate file be opened at the Nyayo House, headquarters," the affidavit reads.

The late Kajwang is said to have instructed that Miguna, who was at that time Raila's advisor, be issued with a Kenyan passport.

"The Kenyan passport was illegally issued to him without any legal backing despite the fact that he already had a Canadian passport. The repealed Constitution did not provide for dual nationality," he states.

According to Kihalangwa, investigations by the department revealed that Miguna is a Canadian citizen who holds passport number HP679627.

"He has at all time travelled in and out of the country using several Canadian passports numbers MJ393885 and WK944502."

Kihalangwa said Interior CS Fred Matiang'i issued a deportation declaration after the department brought the matter to his attention.

"Pursuant to the orders referred to, I instructed my officers on February 6 to ensure that the orders have been effected," Kihalangwa said.

He said: "The applicant was arrested within the precincts of inland container depot-Embakasi and taken to JKIA for purposes of deportation and did board KLM flight number KL0566 to Toronto Canada via Amsterdam."

Kihalangwa, however, said the department was not aware of the court orders as none had been served as it would definitely comply.

He added that the immigration department is not party to the application in question.