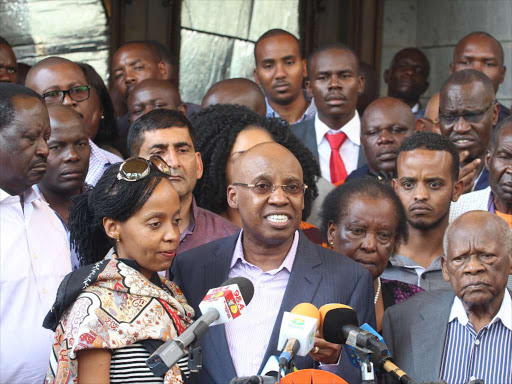 Businessman Jimmy Wanjigi and his wife and the father Mr.Wanjigi addressing Journalists at his home with his is the NASA presidential candidate Raila Odinga./EZEKIEL AMING'A

Businessman Jimmi Wanjigi has described his "obituary" in Wednesday’s Daily Nation as a "death promise" and has demanded a probe on the matter.

Wanjigi dismissed the media house's claim that it was a mix-up. It was intentional and paper played the messenger's role in a broad scheme of his faceless enemies, he said.

He wants NMG to give him names of the members of the staff who received and booked the obituary, saying he lacks faith in police to unravel the matter that has caused pain to his family members.

“Who within Nation Media Group processed and approve this? Those are the people who should be taken to court for promising my death,” he said.

“NMG issued a death promise. I don’t think in the history of this country we ever seen such a thing, that somebody who is alive is in the obituary pages. It is not possible," Wanjigi said.

He vowed to sue the media house, saying it was not genuine about the circumstances that led to his picture being published in the obituary pages.

“I have my lawyers, international lawyers, who are working on the case. I'm not taking it lightly. What they did is horrific. It didn’t hurt me as much as it hurt my family. I have children schooling abroad who were called after being told it looks like your father is dead," Wanjigi said.

Speaking at the DCI headquarters, Wanjigi said he does not fear for his life, but said the country is in a "twilight zone" and anything can happen to him.

“If police killed 200 during the elections, I will be just another statistic if they do that to me. And if they do that, then Nation Media Group knows who they are because they were a messenger," Wanjigi said.

The death announcement was published on page 49 of Wednesday's Daily Nation.

The obituary states that Wanjagi is the son of a James Maina and Wambui Magari and a husband of an Irene - names that are coincidentally of the Wanjigi family. Interestingly, his funeral was to be yesterday February 6.

The advertisement further linked Wanjagi to Kwacha Industries - a franchise of the Wanjigis.

In a statement on Wednesday, Nation Media Group apologised to the family of Wanjigi.

Wanjigi told journalists the NMG acting CEO visited him on Wednesday to apologised, but failed to give the details of the staff members who processed the advert.

On Wednesday, NMG released CCTV footage of a man believed to have planted the obituary and appealed to members of the public to help in his identification.

Wanjigi termed the surveillance footage- which was circulated in the social media- as sideshows and insisted he be provided with those who received and processed the cheeky death advert.

The businessman and other NASA MPs had gone to the DCI headquarters as directed by the High Court.

They however did not record statement as police told them they are not ‘persons of interests as at now’.