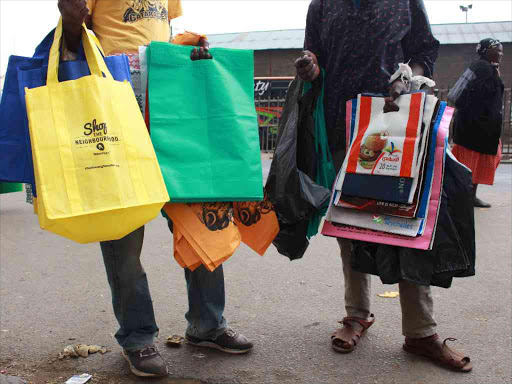 Hawkers on the streets of Nairobi on August 22 /VICTOR OMBOTO

The success rate in the implementation of the ban on plastic carrier bags currently stands at 80 per cent, the government has said.

Environment PS Charles Sunkuli said yesterday that the rate is based on the supply, which has been cut.

The success of the ban is largely a result of the overwhelming support the ministry has received from wananchi, he said. The ministry is working closely with the Customs authorities and the Immigration department to ensure the gains are not reversed, Sunkuli said.

“We have managed to cut the supply. Companies that were manufacturing have stopped,” he said at his NHIF offices, Nairobi, adding no new deposits of plastic carrier bags are sold in the streets.

Sunkuli added, however, that some unscrupulous small-scale traders still have the banned plastics.

He warned that it will not be business as usual for the culprits. Some contraband is being sneaked into the country in small quantities and the government will not allow the trend to continue, he said.

“We’ve noted a number of areas this is taking place. We would like to take this opportunity to warn the traders that we will not allow the plastic bags to be brought back to the market,” Sunkuli said.

Airlines have also been in the forefront announcing to their passengers that Kenya does not allow plastic bags.

Sunkuli said the ministry is contemplating action on plastic bottles, which have also become an eyesore.

He said many Kenyans want plastic bottles phased out. The National Environment Management Authority is set to issue guidelines on a “take-back scheme” for the plastic bottles by the end of April, Sunkuli said.

The Environment ministry banned the use of plastic carrier bags through a gazette notice dated February 27 last year. The ban came into effect in August.

The government says the ban will help protect the environment and improve living standards. Last year, the High Court dismissed a petition that sought to have the ban suspended, as it protected the public interest.