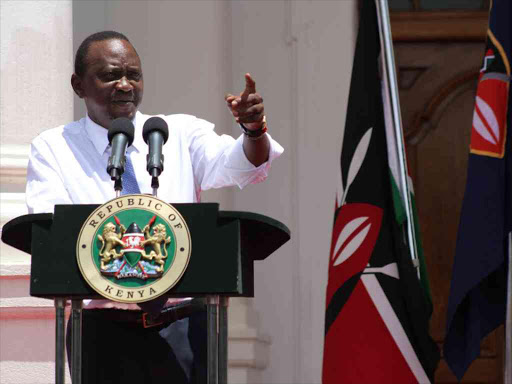 President Uhuru Kenyatta while naming the 12 nominees to the cabinet at state house yesterday./JACK OWUOR

President Uhuru Kenyatta is staring at a court battle with lobby groups challenging the “unconstitutional” composition of his new Cabinet.

At least three lobby groups have rejected Uhuru’s proposed Cabinet by filing petitions in court to bar Parliament from vetting the nominees on Thursday and Friday.

The public has until Wednesday to submit memoranda to Parliament on suitability of the Cabinet Secretary, Principal Secretary and ambassadorial nominees before the vetting.

The Kenya Human Rights Commission, the Centre for Rights Education and Awareness, and the Federation of Women Lawyers argue Uhuru did not consider the constitutional threshold on gender representation, people living with disability and regional balance.

Cotu is also among organisations that are dissatisfied with the composition of Uhuru’s cabinet. Secretary general Francis Atwoli yesterday told the Star Uhuru should address unconstitutional issues lobby groups and other stakeholders are raising.

“The Cabinet should be all-inclusive. Uhuru should get a way of including more women, youths and persons with disabilities,” Atwoli said. He, however, affirmed Cotu members are committed to support the President and nominees who will make it to the Cabinet after the vetting and approval by Parliament this month.

Uhuru nominated six women of 20 CSs, a number the lobby groups argue does not meet two-thirds gender threshold provided in the Constitution for public appointments.

The lobby groups argue six slots given to women translate to 21 per cent of the 23-member Cabinet, the President, his deputy and Attorney General included. “The percentage of women in Cabinet remains grossly below the constitutionally stipulated percentage. Worst still, it has retrogressed,” KHRC has said.

Post a comment
WATCH: The latest videos from the Star
by By SAMUEL KISIKA @KisikaSam
News
05 February 2018 - 08:45
Read The E-Paper