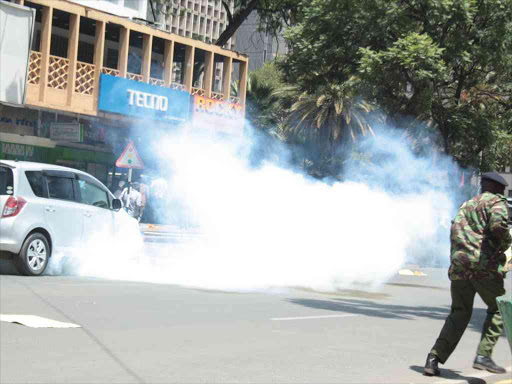 Anti-riot police officers fired tear gas on Monday to disperse activists who demonstrated against the government's shutdown of TV stations.

The group marched from

Freedom Corner in Uhuru Park, along Kenyatta Avenue, and made stopovers at Standard Group and Nation Centre.

They demanded that the stations owned by these media houses by reopened - KTN and NTV were shut alongside Citizen which is owned by Royal Media Services.

The civil societies rejected a "return of dictatorship" and

urged the state to stop the "persecution" of journalists Ken Mijungu, Larry Madowo and Linus Kaikai of NMG.

A senior police officer said they had been instructed to block demonstrations along the avenue.

Mue noted concerns about "the dangerous turn in our country where we are seeing a very dictatorial way of doing things".

"We are saying that we are concerned about the dangerous turn our country has taken. In the recent month, we have seen an introduction of a very dictatorial way of doing things," he told journalists.

"We are here to defend our constitution and say we will not stand a government that is quickly becoming a criminal enterprise.

We have seen the blacking out of major TV stations that Kenyans rely on for local news. We have seen arbitrary arrests of opposition politicians. These are not just arrests but abductions by a police force that is quickly becoming a criminal gang."

violations of human rights such as access to information.

Some of the civil society members who protested against the TV stations shutdown in the Nairobi central business district, February 5, 2018. /Joseph Ndunda

Some of the civil society members who protested against the TV stations shutdown in the Nairobi central business district, February 5, 2018. /Joseph Ndunda

The activist further criticised the Uhuru Kenyatta's Jubilee administration for resorting to dictatorship and taking the country back to single-party rule instead of resolving issues that hold the economy at ransom and cause youth unemployment.

Kegoro announced plans for public action and engaging relevant authorities and the courts in the fight against dictatorship.

"What started a few days ago [crackdown on opposition politicians], after the opposition swore-in Raila Odinga as the people's president, is disturbing and regrettable to us as citizens of the country," he said.

"We have seen the muzzling of media through closure of TV stations. A court ordered the re-opening of the stations but the government has defied the orders," he said.

"Miguna Miguna was arrested and the court ordered his release but the government defied the order. We are seeing what the [former president Daniel] Moi government did - arresting someone at one place and taking him around the country to punish them before they are charged."