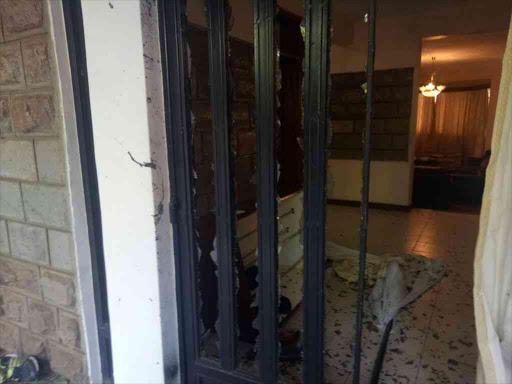 Part of the damage at lawyer Miguna Miguna's house in Runda, Nairobi, following a raid by police, February 2, 2018. /Courtesy

Lawyer Miguna Miguna was arrested in a dramatic fashion at his Runda home in Nairobi on Friday.

Police used force to break into his house before arresting him after a brief standoff.

Miguna was arrested days after he and Ruaraka MP TJ Kajwang administered an oath to opposition leader Raila Odinga at Uhuru Park.

He was the one who stamped the document and

the self-declared 'general' of the outlawed National Resistance Movement.

Miguna reported that an "assassination squad" was looking for him at his home.

Text messages believed to be from him stated: "They have arrested me. They have bombed my house and broken everything. They are still here.

"They are searching all rooms. It’s an assassination squad. I can’t speak. They are still here ... looking for me."

Kajwang was arrested on Wednesday and on Thursday,

Miguna dared Interior cabinet secretary Fred Matiang'i to arrest him for his role in the swearing-in.

It was reported that Flying Squad officers looked for the lawyer hours after apprehending Kajwang'.

"Matiang'i, if you are looking for me, I am ready and I have been ready since I was a teenager," Miguna said.

him. You [Matiang'i] are nothing."