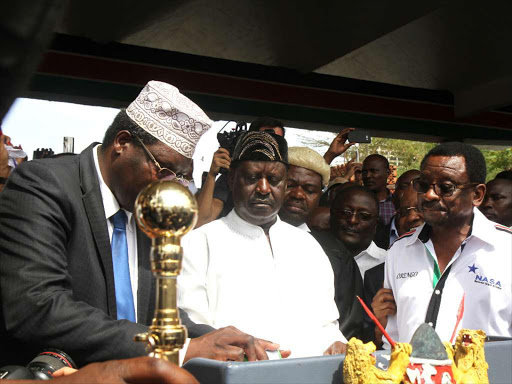 The Media Council on Wednesday asked the government to switch on signals of three privately owned TV stations that were switched off on Tuesday.

The council said the switch off was denying Kenyans their right to information as enshrined in the constitution.

"The media council is shocked that at the recent turn of events in Kenya, a political contest has turned out into the greatest threat and assault on freedom of expression," CEO of the council David Omwoyo said in a statement.

Omwoyo said that the council does not believe how the three stations KTN, Citizen and Standard Media Group will interfere with the ongoing investigations.

"While it was initially alleged that the switch off was to stop media houses from airing live the swearing in of Raila Odinga, more than 24 hours their signals have not been restored and no explanation put forward as to when they will be allowed to resume operations," Omwoyo said.

The Communications Authority switched off the signals of the three channels hours before Raila Odinga took oath as the people's president.

The government has maintained that the stations will remain off air until investigations into charges that have not been mentioned are complete.

Interior cabinet secretary Fred Matiang'i made this announcement during a press conference on Wednesday.

"As a result of what happened yesterday, we have commenced investigations targeting individuals," he said. "Media houses will remain closed until we complete investigations."

Citizen TV was the first to be switched off at around 10 am followed by NTV.