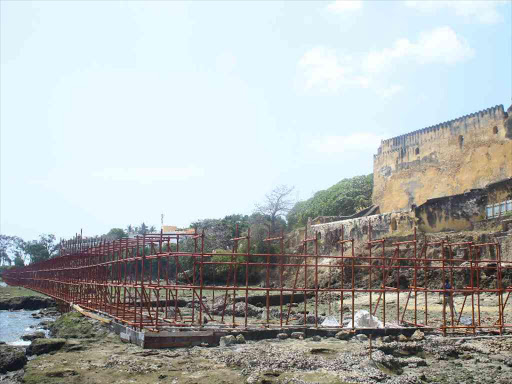 A view of the Sh500 million sea wall that is being built by National Museums of Kenya to protect Fort Jesus from erosion, Janaury 16, 2018. /John Chesoli

Imagine a situation where the whole of Fort Jesus comes underwater because of rising sea levels caused by rising temperatures due to climate change.

Rising sea levels threaten to wipe out thousands of jobs as well as submerge the hotels and beach resorts which form the backbone of tourism.

The catastrophe facing coastal cities and regions is aptly captured in '', which is based on peer-reviewed scientific research.

Scientists agree that human activity is heating the planet. But how quickly could sea levels rise? And can we stop it?

Rising temperatures are contributing to the melting and decay of the Greenland and Antarctic ice sheets.

Indications are that these apocalyptic sea level rises can occur as early as 2200 unless measures are taken to reverse the trend.

In recent years, deaths from floods have been on the rise. Last year, 10 people died as a result of flooding in one incident in Mombasa.

After a 48-hour downpour, some 1,600 people across six sub-counties of Mombasa were affected by the floods.

Other coastal counties like Kilifi, Kwale and Taita Taveta also experienced floods, leading to displacements, impassable roads, buildings caving in, bridges being swept away, loss of property and even deaths.

In two years time, the sea level rise in the coastline region will lead to a 20 per cent accrued risk of flooding above 5 feet.

It is predicted that a slight increase in temperatures by 4 degrees C (7.2 degrees F) will see Mombasa and other coastal regions submerged as sea levels rise.

The map shows the water levels overflowing to Port Reitz, and in many cases, fully or partially submerging everything up to Moi International Airport.

A view of Fort Jesus in Mombasa. /Elkana Jacob

affirms the rise in temperatures and says the rising sea levels have prompted some hotels to erect walls to prevent the water from getting into their buildings.

"One of the impacts of sea level rising is that the tides now get further inland and people are now putting up walls to make sure the water doesn't enter the resorts," he said.

Cities like Manhattan are already putting up a storm surge wall barrier to protect New York city from the effects of global warming.

In Nigeria, an innovative local architect is experimenting with building a prototype floating structure at Makoko, on the lagoon at the heart of the largest city, Lagos.

Air pollution caused by the extraction and burning of fossil fuels is one of the key drivers of climate change.

Gases emitted by man-made sources such as cars are not only harmful to human health but also create a ‘blanket’ which traps the sun’s rays near the earth, thereby contributing to a rise in temperatures and affecting the climate system.

reported that the effect of greenhouse gas emissions will continue to be felt for centuries even if action is taken to stop them now.

Coastal regions and island nations will still be at risk from rising sea levels.

Environment specialist Eric Mgonja told The Star that the government has not done much to avert the crisis that may befall the country in years to come.

“Climate Change is a new phenomenon. As we speak right now, and with devolution, county governments are trying to domesticate the Paris Agreement so they can come up with laws and policies for dealing with the change,” Mgonja said.

“As a country we are coming up with measures that will deal with this in the future.”

Kenya ratified the Paris Agreement which took effect on January 27, 2017 and became part of the country’s laws.

But Mgonja noted these agreements have yet to be translated into laws, guidelines or even public awareness so concrete action plans are made to mitigate against the effects of climate change.

“We are still behind when it comes to domestication of climate change,” He said.

If this is anything to go by, then the country needs to put in place measures

that can help cut extreme carbons.

Kenya has an expansive coastline that is the bedrock of tourism and fishing industries. Rapid population growth, urbanisation and climate change have posed new challenges to livelihoods along the 600-kilometer coastline.

Mgonja said the construction of infrastructure along the coast is done on the premise that it must be climate-change free.

This is in relation to the multi-billion Lapsset project which Kenya is spearheading to strengthen its position as a gateway and a transport and logistics hub to the East African region.

“Each county must have a plan that is established according to the County Government Act. During initial stages, the plan puts a climate change proof or climate change compliant structure to avert any crisis,” Mgonja said.

He said the plan is to ensure issues of climate change do not affect the structures in future.

According to Tourism Act, 2011, the development of a national tourism strategy like the Lapset project must be adapted to avert adverse impacts of climate change on tourism and tourism products and services.

“The Lamu port project has a master plan in which it is designed in a manner that climate change does not affect it," Mgonja said.

Lapset corporate affairs chief Benson Thuita says they are relying on the Lamu wall for the project but noted conversation around climate change is ongoing.

“We are trying to have green investment and technology but as for the sea water levels,I haven’t seen that on the plan though it is a conversation that is going on,” Thuita said.

“The rising sea level is also global. There is a wall in the entire front of the coast that helps efforts high tides. But then in this project we are going green.”

The global sea level has been rising over the past century and the rate has increased in recent decades.

According to National Ocean Service, the sea level continues to rise at a rate of about one-eighth of an inch per year.

Higher sea levels mean deadly and destructive storm surges will push farther inland than they once did, which also means more frequent flooding.

"Our cities are not ready for climate change. None of the coastal towns or cities have put in place measures to deal with challenges as simple as floods which have become increasingly common,” Mgonja.

He warns drinking water sources are at risk of contamination from sea water and urges county governments to start looking at ways to mitigate against such an eventuality.

"It is time we started thinking of how to mitigate against the inevitable health impacts of climate change," he added.

Ambenje noted the rise in temperatures has contributed to the existence of diseases in some regions of the country where they were previously uncommon. He cites malaria as an example.

"We have malaria in highlands such as Kericho which were previously free of the disease. It has

now become a problem because the change in climate has made it easier for malaria-bearing mosquitoes to survive."

International Water Management Institute author Matthew McCartney said: "It is not all good news since floods will also increase in frequency and magnitude and this will complicate water resource management.”

A construction site at the Lapsset headquarters in Lamu county, April 8, 2015. /Andrew Kasuku

Efforts to remove pollutants from the air could result in an increase in warming, extreme weather and other climate effects, according to

Specifically, removing aerosols, which are human-made pollutants often emitted by industrial activities, could push the earth's temperature to become half a degree to 1.1 degrees Celsius

The two major causes of the global sea level rise are thermal expansion caused by warming of the ocean (since water expands as it warms) and increased melting of land-based ice, such as glaciers and ice sheets.

The oceans are absorbing more than 90 per cent of the increased atmospheric heat associated with emissions from human activity.

According to the Intergovernmental Panel on Climate Change, the global mean sea level has risen by 10 to 20 centimeters.

But the annual rise over the past 20 years has been 3.2 millimeters per year, roughly twice the average speed of the earlier 80 years.

This has been brought on due to the burning of fossil fuels and human activities that have released large amounts of heat-trapping gases into the atmosphere, in turn increasing the atmospheric heat.