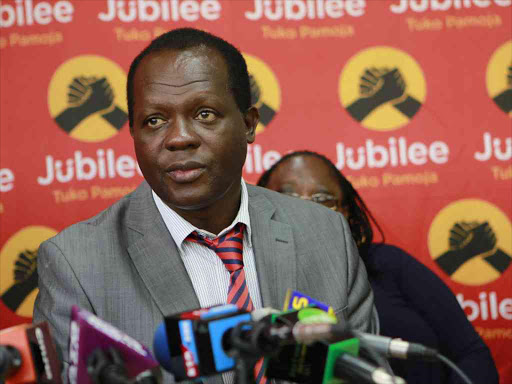 Head of the Jubilee Party secretariat Raphael Tuju during a press conference at the ruling coalition's headquarters in Pangani, Nairobi, March 18, 2017. /MONICAH MWANGI

has said, and accused the media of misreporting facts.

President Uhuru Kenyatta, in changes unveiled last Friday, nominated Tuju to the Cabinet as a secretary without a portfolio.

Should his nomination sail through, he will become the second person to hold the position in Kenya’s history.

minister without a portfolio following his appointment by the colonial administration in 1956.

But Itumbi, who is State House digital communications director, downplayed Tuju's appointment saying it is aimed at "placing Jubilee agenda at the heart of decision making".

"You cannot have a CS who only sits in the Cabinet sometimes, 'on a need basis'... Tuju remains Jubilee SG," Itumbi said via twitter on Sunday.

Itumbi, who was having a conversation with NTV manager Linus Kaikai, said the media should stop publishing

"Co-opting into Cabinet 'on a need basis' can surely not make you a CS. It is a tool aimed at informing or enriching Cabinet decisions," he said.

Itumbi said in Cabinet, one can co-opt experts on a need basis, adding that "Jubilee agenda will be part of government delivery and focus."

But speaking to The Star on phone, Tuju said its upon the president to tell Kenyans what the position means.

"I am not familiar with the comments. It is not in my capacity to explain this to newspapers. But when something is not clear, its appropriate for the president to clarify."

Tuju’s nomination is seen as a reward for his role in Uhuru and DP William Ruto’s re-election last year.

While his nomination to the Cabinet was widely expected, the decision to give him an unspecified role was unforeseen.