One super vaccine for all goat, sheep diseases to reduce cost 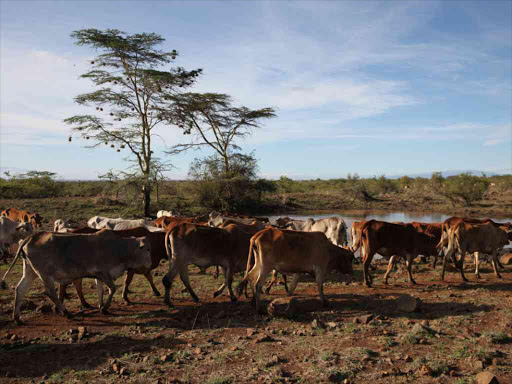 Cattle on Ol Maisor cattle ranch in Laikipia on May 9. Herders have occupied the ranch and others in the county /THOMSON REUTERS FOUNDATION/KATY MIGIRO

Researchers are looking to develop a super vaccine against four diseases that affect small ruminants to reduce cost and ensure efficiency in their control.

Kenya Agricultural and Livestock Research Organisation scientist Hezron Wesonga on Friday said they were already collecting data on the diseases.

The diseases have been blamed for low production. Wesonga said farmers lose up to half of their goats and sheep to the diseases, yet they can be controlled.

Wesonga said researchers want to develop a single vaccine against all the four diseases, unlike currently where four different vaccines are administered against the illnesses.

Speaking in Kajiado, Wesonga said the vaccine will also reduce labour and cost of administering the vaccines.

It costs a farmer Sh50 to buy one vaccine, meaning those with 300 goats spend Sh6,000 to administer the vaccines.

Wesonga said goats and sheep are less understood by researchers on livestock diseases. He cited lack of veterinary services as a challenge in developing vaccines.

According to the Kenya Bureau of Statistics, there are more than 27 million goats and 17 million sheep across the country. The population of cattle stands at 20 million with three million camels and two million donkeys.

“Farmers have been forced to administer vaccines on their own, yet they do not have enough information on what vaccines are available for a particular disease. Most farmers vaccinate their animals based on their observation and postmortem,” Wesonga said.

He said the government stopped recruiting veterinary officers, with those in the service almost retiring.

“This has forced farmers to give the vaccines on their own. Many government veterinary officers are either retired or almost retiring,” Mungube said.

He urged farmers to stop vaccinating their animals without consulting professionals, saying it had adverse effects.

“We want to work with the county governments to ensure farmers get services on time,” Mungube said.