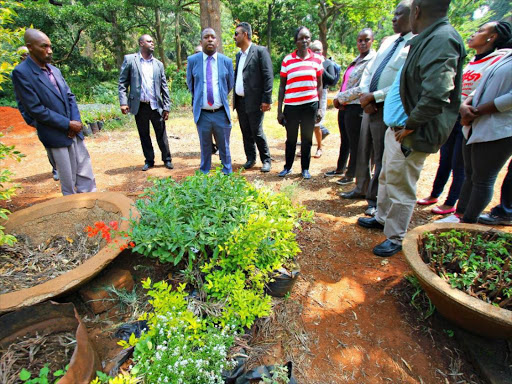 Governor Mike Sonko with other officials during a tour of the county's environment department farm in Parklands, Nairobi, January 27, 2018. /GPS

Governor Mike Sonko said the county will plant flowers and grass major the roads and pavements in the Central Business District.

This came a day after the governor conducted an impromptu tour around Nairobi CBD on Thursday night.

"Nairobi is a commercial hub. We need to invest on transforming it to continue attracting more tourists and investors."

He was accompanied by other leaders, among them the Nairobi Environment CEC Mahmoud Dagane.

The governor directed that metal bars should also be erected along the pavements to curb accidents along the streets.

The beautification programmes comes barely days after Nairobi was ranked the top most dynamic city in Africa, in a new global rating.

According to the JLL 2017 City Momentum Index (CMI) released on Friday, the city was rated number three in the continent.

The CMI index is used to identify change and highlight which cities or metropolitan areas may be best at positioning themselves to compete in the current ever-changing economic landscape.

Innovation and technology, environment and Housing were some of the factors used to rank the cities.

Nairobi was among those with established support and nurture technological changes.

The top five cities, according to the latest global index, were Bangalore (India) followed by Hon Chi Minh(Vietnam), Silicon Valley( US), Shanghai( China) and Hyderabad( India).

In the sixth position was London(UK) , while Austin(US), Hanoi (Vietnam), and Boston(US) were seventh, eighth and ninth respectively.