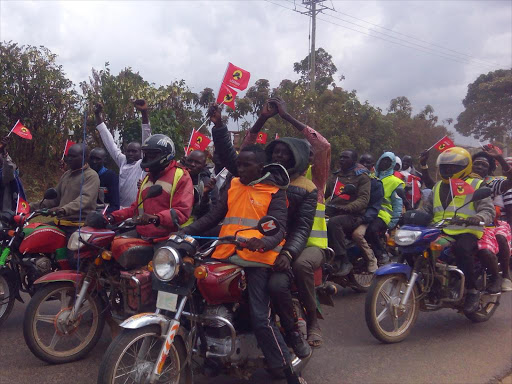 The ex-county boss was named in the changes announced by President Uhuru Kenyatta in a televised address on Friday.

The Pokots, who hit the streets in song and dance after the news, also hailed the president for retaining Micah Powon as principal secretary for ASAL areas.

They sang songs in praise of the former governor and the Jubilee government, and waved placards which read: "Thank you Uhuru Kenyatta for CAS Kachapin".

The lot said the former governor's appointment has renewed their energy and given them hopes to campaign for William Ruto for president ahead of the 2022 polls.

Esther Cheption, a nominated MCA, said it is a blessing for the Pokot community to be awarded two slots in the face of the competition over the limited positions.

"We believe the Pokots will benefit at large in the education sector now that we have the right man in government," she said.

Jane Ruto, chair West Pokot Jubilee women league, said they will continue popularising the party in the region as they gear up for the next election.

"Kachapin was a performer when he was our governor. We believe the position will enable him complete the education projects he had started," she said.

However, on the flipside, Kanu supporters faulted Uhuru for not considering a member of the team in the new Cabinet appointments despite them campaigning for him.

Meshack Kakuko, a Kanu supporter, said the two positions awarded to the Pokot community is not satisfactory citing that they expected to be given a Cabinet Secretary slot.

"Our neighbours in Turkana have been given a CS position even though they didn’t deliver so much votes to Uhuru. It seems like the jubilee government has not done justice to us."

He added that it would have been better if Kachapin could have been proposed as a PS or rather the president should have consulted them on the most appropriate choice.