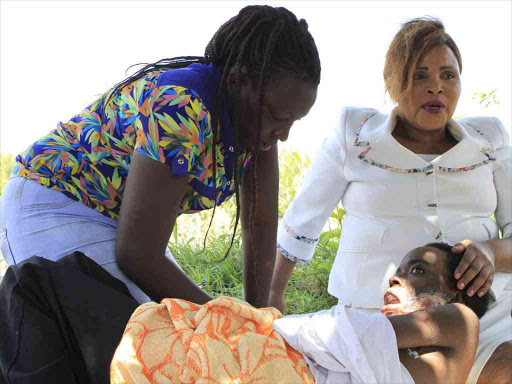 Pauline Mugure, 20 (lying down), was burned with a stove by her husband after a quarrel over a text message on January 24 last year /MONICAH MWANGI

At least 357 cases of gender-based violence have been reported this month.

Gender CS Sicily Kariuki in a statement said this is an increase compared to 319 and 235 in December and November last year, respectively.

Of the reported cases, psychological torture leads, followed by physical assault. Nairobi county tops in the number of cases, followed by Kiambu and Kakamega.

In Nairobi, 222 cases of GBV were reported between November last year and January this year.

Kakamega is third with 57 cases. In Kakamega 24 women, 23 girls, two men and eight boys have reported violence cases. Lamu, Nyamira and Kericho had the least reported cases of GBV.

The reports were made through a 24-hour hotline service number 1195. It is managed by Healthcare Assistance Kenya and the Gender Affairs ministry. Kariuki said the increased cases are alarming and this demonstrates that GBV remains one of the most pervasive human rights violations in Kenya.

“I’m greatly concerned by the increased reports of numerous cases of gender-based violence across the country, including early child marriage, domestic violence and sexual violence,” she said.

“Of particular concern are the recent allegations of sexual violence at the Kenyatta National Hospital.”

The CS urged Kenyans to be patient as the country awaits the outcome of the investigations initiated by the DCI on the KNH rape claims.

“I understand their concerns and urge for patience as we await the outcome of the investigations. I’m certain that in the fullness of time, we shall get to the bottom of this matter,” she said.