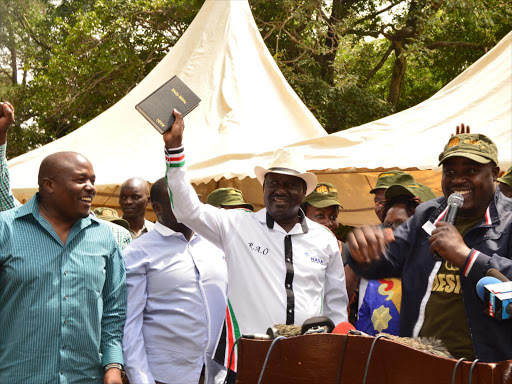 Nasa principal Raila Odinga lifts the Bible presented to him as a birthday gift from Western leaders in Kakamega, Sunday, January 7, 2018. /CALISTUS LUCHETU

The petition challenging the constitutionality of the People’s Assembly will be mentioned on the day set for NASA leader Raila Odinga’s swearing-in – January 30.

The High Court yesterday certified as urgent the case initiated by Attorney General Githu Muigai. Justice John Mativo directed the AG to file and serve all parties and appear in court on Tuesday for an inter-partes hearing.

“The Constitution has established structures and institutions within which any grievances can be addressed within the law. Any other mechanism other than that which is provided in the law is an attempt to overthrow the Constitution and is null and void,” the petition reads.

Deputy Chief State Counsel Charles Mutinda, acting for the AG, asked the court to also issue an order prohibiting any other county assembly from passing a motion establishing the People’s Assembly.

He said the institution of the People’s Assembly by the county assemblies is an illegality as the term is alien to the Constitution and is neither established within the framework of the County Government Act nor any other legislation.

He also said the People’s Assembly is not envisaged by the architecture and framework of the Constitution.

“The greater range of issues in the proposed agenda for the People’s Assembly was domiciled within the mandate of Parliament, being the constitutional body tasked with the oversight of commissions and independent offices, including the electoral agency, the review of devolution implementation, and the legislative scope on electoral laws,” Mutinda said.

He added the establishment of the proposed assembly is also not envisioned within the mandate or function of the county assemblies.