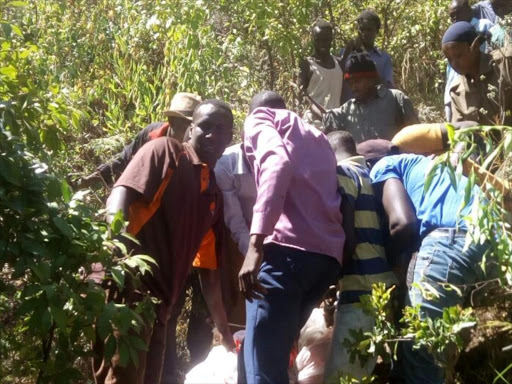 Keiyo North locals and police officers remove the bodies of two paragliders who were involved in a parachute accident on Tuesday January 23, 2018. /STEPHEN RUTTO

A US and a Czech Republic national were killed in a paragliding accident at the Kerio escarpment on Tuesday.

US' Kimberly Ann, 39, and Tomas Lednik lost control of the flying devices and fell on a rock at Kipkaa area in Keiyo North.

Area police boss Mwenda Meme said the two foreigners were using the same paraglider at the time of the incident.

"It took at least four hours for locals and the police to reach the area where the duo fell on due to escarpment's rugged terrain."

Meme said the two tourists may not have undergone proper paragliding training.

However, web searches indicate that Lednik is a qualified paradgliding coach and trainer.

"He is graduated first class coach of parachute sports, he flys paragliding wings of all kinds and sizes in free flights or with paramotor since 1992," Lednik's website says.

The Tuesday incident brings to three, the death toll of accidents of such nature at the escarpment.

Meme told the Elgeyo Marakwet county government and the Kenya Civil Aviation Authority to suspend paragliding in the area.

He said the police are investigating to establish whether the paragliders are adhering aviation regulations.

"Police have obtained passports from Kerio View Hotel where the tourists were staying as investigations continue."

Ann, according to the police boss, has been visiting Iten regularly for the past 17 years to train paragliders.

On January 9, a German national Gerd Schegler, 55, died after his paraglider crumbled.

This story has been updated