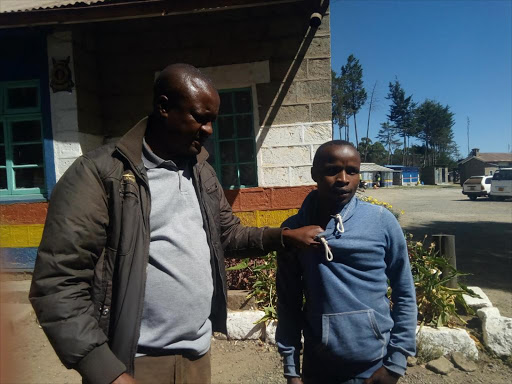 Joseph Wamithi after he was arrested in Ol Kalou, Tuesday January 23, 2018. /NDICHU WAINAINA

A man who escaped from an Ol kalou police cell last year has been arrested for defilement.

Joseph Wamithi, 27, was arrested on Tuesday after a 14-year-old girl who disappeared from a school at Munyeki in Ol kalou was traced to his house.

Police said the girl disappeared from their home on January 14 and was declared missing after she couldn't be traced.

Nyandarua Central police boss Wilson Kosgei said the parents were worried that their daughter was killed.

"But after the matter was shared on social media, she was found cohabiting with Wamithi for the eight days she has been missing."

It was when the police went to rescue the girl that one officer noticed Wamithi as an escapee in another defilement case.

"As we were looking at our records, we realised he also committed a similar offence last year," Kosgei said.

"We are going to prefer two counts of defilement against him."