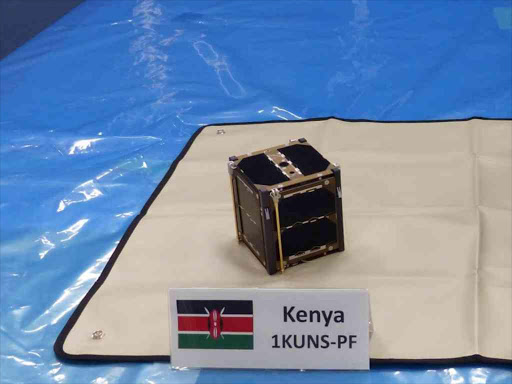 The nano-satellite developed by a team from the University of Nairobi.

The first ever satellite made by Kenyans in Nairobi is now complete and will be launched from the International Space Station.

The satellite was developed by engineers from the University of Nairobi in collaboration with the Japan Aerospace Exploration Agency (Jaxa).

It comes in a new form known as nanosatellite, which refers to an extremely small satellite in the shape of a 10 by 10 centimetre cube, which has the volume of just one litre.

However, its development cost Sh120 million and was largely financed by Japan.

Koichi Wakata, the Jaxa ISS programme manager, said the small satellite will be delivered to the ISS in a larger vehicle in March.

It will then be launched into space from Jaxa's robotic arm on the ISS, known as Kibo, in April or May.

"At Jaxa, we are committed to making every effort to prepare for the successful deployment of the Republic of Kenya's first satellite utilising the unique capability of the Japanese Experiment Module “Kibo” on the ISS," Wakata

said in a statement.

The ISS is a large spacecraft built by several countries to continually orbit around Earth.

It is also a home where astronauts live and work on several experiments.

UoN's engineer Dr Jackson Mwangi, who was involved in the nano-satellite development, said it was handed over to Jaxa in Japan on Tuesday last week.

The satellite was developed through a programme known as KiboCUBE, launched in September 2015, by the United Nations Office for Outer Space Affairs (UNOOSA) and the Jaxa.

The programme offers educational and research institutions from developing countries the opportunity to deploy cube satellites from the ISS.

Applications for the first round of KiboCUBE selection closed in March 2016 with UoN beating other global institutions to emerge as the winner.

"This is a very exciting moment and an important step in UNOOSA's movement towards tangible initiatives in our capacity-building efforts. Innovative projects like KiboCUBE can achieve concrete results and have a real impact on space science and technology development for the benefit of all," said UNOOSA Director Simonetta Di Pippo.

The UoN team said it would use its satellite to test technologies it has developed for the future launch of a larger earth observation satellite.

The team also hopes to apply data acquired from the satellite to monitor agriculture and coastal areas.

The Japan Embassy in Nairobi said the deployment of CubeSats from ISS is easier than the direct deployment of a launch vehicle thanks to the lower vibration environment during launch.