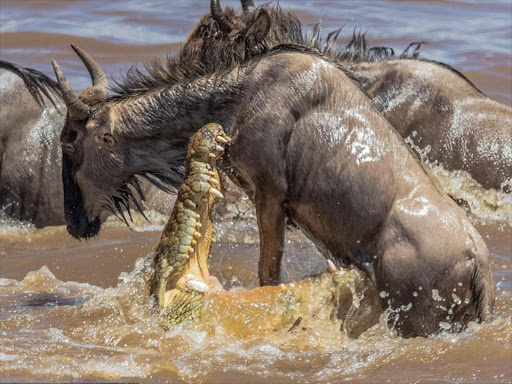 Snapped! One unlucky wildebeest was ambushed by a hungry crocodile as it attempted to cross a river. /Adrian Burrows/Via Daily Mail

Thrilling action shots show the moment one unlucky wildebeest was ambushed by a hungry crocodile as it attempted to cross a river.

A series of spectacular photographs depicts the moment the stealthy 500-pound crocrodile clocked eyes on the group of wildebeests and blissfully swam alongside them before picking one out for dinner and aggressively lifting it out of the water into the air.

Other images show the wildebeest make an unsuccessful bid for freedom before being dramatically dragged underwater by the reptile.

Post a comment
WATCH: The latest videos from the Star
by Daily Mail @MailOnline
News
22 January 2018 - 09:00
Read The E-Paper