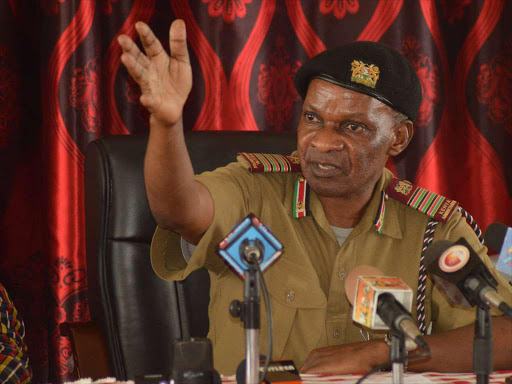 Coast regional coordinator Nelson Marwa during a press conference at his office in Mombasa on Sunday morning.Photo / JOHN CHESOLI

Nelson Marwa has ordered the closure or the review of liquor licenses for four stripper clubs in Nyali, Mombasa.

The Coast regional coordinator did not mention the clubs only saying “the matter is under consideration”.

The administrator also said the strippers - which investigations reveal are of Indian and Nepal nationalities - must be apprehended.

The Star could not independently verify if this club is among those on Marwa’s watch list - though it had been raided before on similar suspicion.

The Indian women were released after recording statements following interventions by the Indian High Commissioner to Kenya.

Zubair Deen, Shama Deen and their daughter Zeba Deen were nabbed by detectives from transnational Organized Crime Unit on December 30.

They were charged with trafficking the 10 women found in their club, Sham House and bar, situated within Nyali.

The family’s lawyer Cliff Ombeta claimed his clients were detained after investigators were “compromised by rival businessmen believed to be well connected with security agents”.

On Friday Marwa hinted at possible collusion between Mombasa police and owners of these clubs.

“Why is it that an officer from elsewhere must be the one to make the arrest,” he said. Transnational Organized Crime Unit police led the operation.

“What is happening in Nyali? What is the motivation? The clubs must be closed and [Mombasa Governor Hassan] Joho review their liquor license,” he said.

The regional coordinator said shisha dens must be closed.

The government banned shisha due to the health risks it poses.

The highly toxic tobacco substance is smoked using a hookah (water pipe) and gained popularity at entertainment establishments in Kenya over the last year.

Post a comment
WATCH: The latest videos from the Star
by ERNEST CORNEL @oduorernest
News
19 January 2018 - 12:00
Read The E-Paper