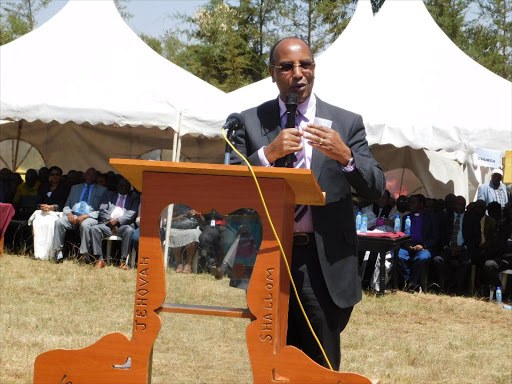 kicked off public vetting of would-be beneficiaries of the County Bursary Fund to ensure only the needy and deserving applicants benefit.

Kimemia said this will also tame corruption in the awarding process.

“We want the money to be awarded openly where residents identify the needy cases so that we ensure the poor among us take their children to school. We don’t want the bursary to benefit the rich or leaders’ children,” he said

Sh40million has been allocated for the bursary in the first quarter.

"There is enough money allocated to ensure not a single Nyandarua child fails to get education due to lack of money," the governor said.

The process is spearheaded by the executive member for ICT and Public Administration, Mbataru Kariuki.

said the fund was in the past awarded to undeserving cases through corrupt ways.

In the ongoing public participation process, duly completed bursary application forms are read out in public at various centres across the county.

The locals identify if the applicant belongs to the given community and agree if they are a deserving case or not.

It is also verified if the children in question are admitted to various institutions of learning to root out masqueraders.

Kariuki said governor Kimemia has issued strict guidelines to be followed in the bursary allocation process where orphans are given the first priority.

The vulnerable, the sick and the aged and those without gainful employment yet have children in school are also considered.

Considered too, are people living with disability and parents who are burdened by having many children in secondary schools.

After public participation process, a committee will compile a list of beneficiaries based on the set-out criteria.

The list will be displayed in public places including churches and Chiefs’ offices.

“This is to give the public a chance to raise objections in case any undeserving people find their way in the final list”, Kariuki said.