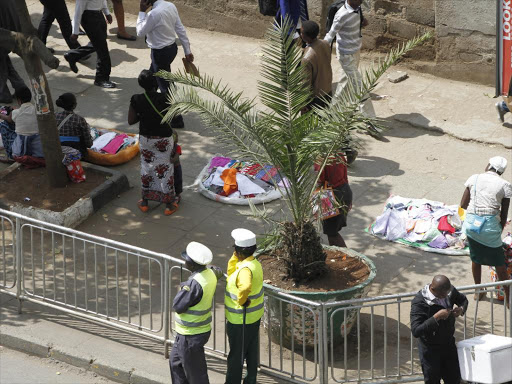 "We are overwhelmed.The number of city askaris working in the CBD is very small," Mbaya said during an interview with the Star.

Mbaya said the county has only 97 askaris currently and in order to fully operate within CBD, they need about 300 city askaris.

"The night operation team has only 15 askaris and it is almost impossible for them to handle all the traders within the city centre," he said.

Mbaya said the other challenge faced by the County Inspectorate department is aged officers.

"The last time the County Government employed city askaris was in 1988. Majority of the city askaris are aged hence they cannot operate effectively," he said.

Mbaya said most of them get fatigue easily and it hinders the department to fully keep up with the city traders.

"The greatest challenge is the mama mbogas. On our side male askaris cannot handle them and we have very few women askaris," Mbaya added.

He said some of the women hawkers hire children at a cost of Sh 200 per day to evade being arrested," he said.

"At times we attempt to arrest them but the public becomes aggressive and even threaten to beat up the askaris for harassing the mama mbogas with children," said Mbaya.

Last year September, Governor Sonko promised that harassment and inhumane treatment of hawkers by County Inspectorate Askaris would be a thing of the past.

Some of the traders especially who operated during the evening had complained of city askaris being aggressive and brutal.

The traders especially the women who were accompanied by children complained of how askaris even whip them in front of their children.

The traders who mostly start operating during the evening have complained of how city askaris have been harassing them.

Political interference is also a challenge according to the Senior Inspector.

"There are situations where we encounter political interference while carrying out our operations and we are forced to stop," he said.

According to Mbaya permanently relocating the traders from the city centre is almost impossible.

"What we can do is controlling because all hawkers are on toes now and our askaris during the day are always on the look out. But definitely, the number of hawkers will definitely reduce."

He urged Nairobi residents to be patient and for change is coming within the city centre.