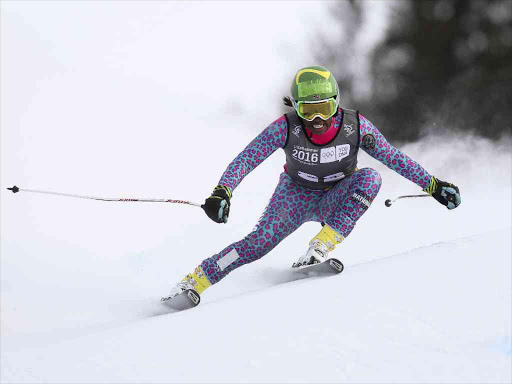 Kenya's Sabrina Wanjiku is deadly serious about her career.

and raised in Austria, has already taken her first steps on the World Cup Alpine skiing circuit and harbours ambitions to establish herself as a professional.

Significantly, Wanjiku competes in the more challenging and dangerous speed disciplines, downhill and Super G. Usually, racers from outside the traditional Alpine skiing nations do not venture beyond the less risky slalom and giant slalom.

Kenyan, that makes me exotic and some people think I can't ski well," she told Reuters after competing in the Super G at St Moritz, the second World Cup race of her career.

"I want to give a good performance that helps me to become a professional."

"At the beginning, people looked at me - okay, a black skier always gets looked at - but when your performances get better and you improve, you win them over," she said.

She will become only the second

Kenyan to compete at the Winter Games after Philip Boit, a former middle distance runner who participated in cross-country skiing at the 1998, 2002 and 2006 Games.

Sabrina Wanjiku of Kenya reacts at the finish line during the FIS Alpine Skiing World Cup in Switzerland, December 9, 2017. /Reuters

While other teams on the FIS circuit boast an impressive staff of coaches, fitness trainers, doctors, physiotherapists and media officers, the

"We can't work as professionally as the big teams who have three of four trainers, physiotherapists and so on," said Reif, who works full-time for the team.

"Sometimes we cooperate with other teams such as Austria and Germany. We also have some partners (sponsors), without them our programme would not be possible."

Sarah, who effectively does the work of the

"In our small team, it's not easy, because our trainer is training, he services the skis, he organises everything," she said.

Wanjiku, who has lived in Austria since the age of three when her mother moved there, has already competed at the Winter Youth Games in 2016 and last year's world skiing championships in St Moritz.

Kenyan but I have the Austrian mentality," she said.

"I didn't live there but I'm very proud of my

enormously. The Olympics have been my dream since I was small."

Post a comment
WATCH: The latest videos from the Star
by Reuters @ReutersAfrica
News
15 January 2018 - 15:00
Read The E-Paper