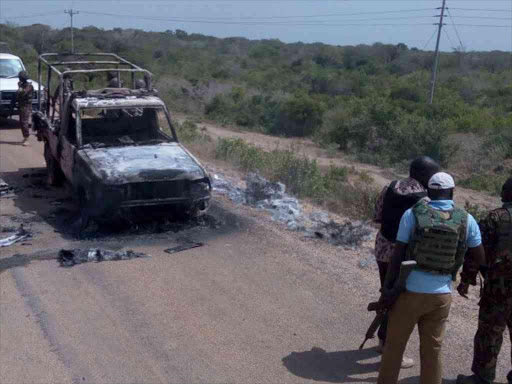 The AP vehicle that was torched by suspected al Shabaab militants during an attack in Lamu county, January 13, 2018. /CHETI PRAXIDES

One person was killed and police officers injured when suspected al Shabaab militants ambushed buses in Lamu on Saturday morning.

The buses were on their way to Malindi and Mombasa when the attack took place at about 11am.

The attackers opened fire on the police officers who were escorting the convoy.

of their vehicles were torched during the attack.

Police spokesperson Mwenda Njoka said they had not established the number of militants who were kiilled.

Njoka added that more security agents were sent to the location -

"Immediately after the attack happened, a contingent

of airborne and ground troops was dispatched from

"Swift action by the security team ensured the buses drove

past the ambush area safely and without further casualties."