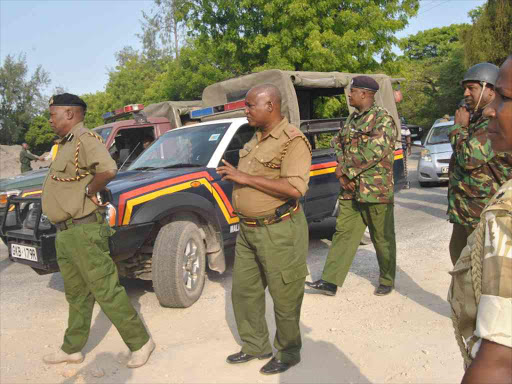 Security personnel who went to effect a court order for a Kenyan and an Italian investor to take over Temple Point Resort in Watamu, January 10. /Alphonce Gari

A Kenyan and an Italian Investor have vowed to acquire a Sh1 billion resort in Watamu by all means necessary.

Isaac Rodrot and Stefano Uccelli said this on Thursday after police failed to execute court orders for them to own Temple Point Resort.

The investors reiterated that the orders were clear and wondered why more than 30 police officers could not effect it. More than 40 people blocked the entrance to the hotel to prevent the takeover following the order issued on Wednesday.

In an interview with journalists in Malindi yesterday, Rodrot alleged the drama was stage-managed by police.

Rodrot noted they called the officers because they could not file any contempt of court suit. But he claimed those who blocked their access to the property were "a few workers and goons hired to create a scene".

“Junior officers said they had not been briefed by their seniors. The orders were with the Watamu OCS. We found people at the gate but none of them produced work identity cards," he said.

“Police should try and enforce the orders of the court. The Inspector General, local police and county officials should ensure the orders are enforced."

Rodrot noted the chaos and burning of a tyre signalled threats to the tourism sector.

The Kenyan investor, who claims he and Uccelli are the genuine owners of the property, also said German

Hans Langer, who is running the resort, "did not appear" during the fracas.

Rodrot said they want a smooth process to business can continue.

"Police should summon Langer and ask him why he does to not obey court orders."

Former employees have accused Langer of mistreating locals by employing foreigners and outsiders.

Mabrouk Bilali, who was sacked under the German's management, said he was not the genuine owner and that he had been blocking Rodrot and Uccelli from accessing the hotel since 2010.

During his time at Temple Point, he said, Langer used them to block Uccelli and Rodrot despite court orders that allowed them to take over the resort.

“I worked at Temple Point from 2010 to October 2015 before being sacked by Langer. I have a contract form showing I worked there. I have a payslip that shows I was a genuine employee," he said.

Bilali claimed goons were hired and that "Langer does not care about the local people".

"We were sacked under unclear circumstances and he disbanded the workers union," he said.

Anderson Chome, another former worker, said he was sacked without compensation .

“We have sought justice, even in court, without any luck. We came to realise the hotel does not belong to him but up to now we do not know why there is no harmony."

Those at the hotel, he said, were "not people from Watamu, a clear indication that the German had no good intentions for locals".

The establishment remains open and Langer said only the court can clarify what the next steps should be.