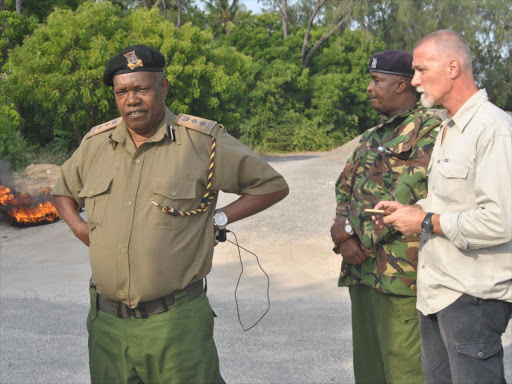 Kenyan and an Italian investor have been blocked from a luxurious Sh1 billion hotel in Watamu because of an ownership row.

Members of the public, staff, and managers of Temple Point Resort barred Isaac Rodrot and Stefanno Uccelli from accessing the facility on Thursday.

They were accompanied by a contingent of security personnel led by Malindi OCPD Matawa Muchangi.

The management blocked the investors despite a court order for them to take over the disputed property currently run by a Hans Jurgen Langer - a German.

The workers, who were armed with rungus, stones and arrows kept guard at the entrance of the hotel. They lit bonfires in protest against the takeover.

Police retreated after engaging them for about one hour, saying courts would address the matter.

Police and the protesters earlier spent more than eight hours at Watamu police station trying to reach an agreement on the matter.

The current management claims Rodrot and Uccelli have no orders to take over the hotel.

They did not reach an agreement.

At the hotel, Watamu elders said they fully supported the German investor and that Rodrot was not the owner.

Langer said the court did not give a precise judgement hence he will not allow the two investors to repossess the hotel.

"The court need to sort out the issue on who is the real owner."

The Temple Point controversy has last about seven years.

Rodrot and Ucceili claim to be the real owners and accuse Langer of using a foreign judgement to acquire the property.

The two said they were determined to take over the hotel as the court order was clear.