State criticises EU report on polls, claims it is ‘premature’ 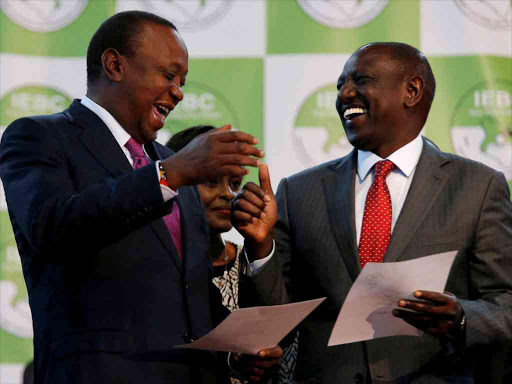 Incumbent President Uhuru Kenyatta celebrates with Deputy President William Ruto after he was announced winner of the presidential election at the IEBC National Tallying centre at the Bomas of Kenya, in Nairobi, Kenya August 11, 2017. REUTERS

The national government has criticised the report released by the EU election observers mission chief observer on the two elections conducted last year.

In the final report released yesterday, Kenya was advised to settle issues of the winner-take-it-all system of government, exclusivity, corruption and ethnic division to curb violence in future.

The European Union noted that the country’s top political leadership should engage in constructive dialogue on democracy.

However, the Kenyan embassy in Brussels said it regrets the “premature manner” in which the report was released. A statement said a meeting with the chief observer was scheduled for yesterday to review the final report.

“The government of Kenya regrets the unprocedural and premature manner in which the final report was released.”

The Kenyan embassy said the action violated the terms of poll monitoring with the EU.

In the report, chief observer Marietje Schaake said, “All Kenyans lose when the country is divided, past wounds are reopened and the economy suffers from these uncertainties.”

Schaake said the government outlined it was not prepared to receive the mission for the release of the report. The report showed that Jubilee and Nasa politicians extended a scathing attack on the Judiciary, civil society groups and Independent Electoral and Boundaries Commission, terming it illegal and undemocratic.

“Jubilee’s unilateral memos on electoral legislation during the fresh election, harsh rhetoric against the Judiciary and intimidation of civil society were highly antagonistic and not consistent with democracy,” she said.

“State resources were abused by the incumbents that were used to their advantage during the campaign,” Schaake said.

“It was extremely concerning that the day before the fresh presidential election, a case seeking postponement of polling could not be heard by the Supreme Court for lack of quorum.

This deepened concerns about political intimidation of the Judiciary”.

The observation mission noted that Kenyans, including five million new youths eligible to vote, did not fully enjoy their democratic rights.

Post a comment
WATCH: The latest videos from the Star
by By JAMES MURIMI @Jamesmurymy
News
11 January 2018 - 00:30
Read The E-Paper