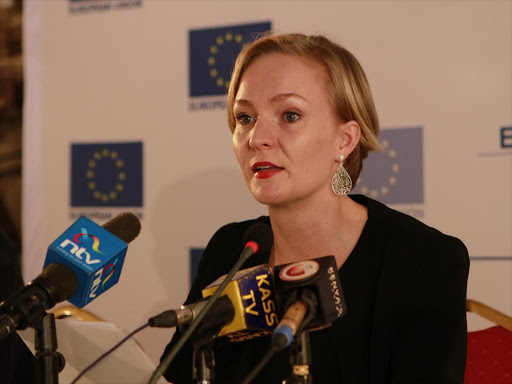 Through its Embassy in Brussels, the government on Wednesday said it regrets the unprocedural and premature manner in which the final report of the EU election observation Mission had been released.

The European Union had in the report accused Kenya of frustrating its efforts to present its reports on October's presidential election in the country.

EU chief observer Marietje Schaake earlier on said she was forced to read the report from their parliament so as to meet guidelines for presenting a report three months after an election.

"The report was released in Brussels after the Kenyan government stated it was not prepared to receive the chief observer in Nairobi at this time," she said in a televised briefing in Brussels.

"Besides presenting a final report to the government, EU EOMs normally organise discussions with political parties, civil society representatives, journalists and other stakeholders."

But the Kenyan Embassy said Schaake's action breached the terms of Kenya's Memorandum of Understanding on election monitoring with EU which called for a structured and official process.

"Let me express my dismay at the dishonest allegation by Hon Schaake insinuating that the government of Kenya was not ready to receive the EU election observer mission. Contrary to this assertion, the government through diplomatic channels in consultation with EU-EOM on scheduling for the release of the report in line with stipulations of the MOU and in last communication of January 6, EU-EOM had confirmed its agreement to scheduling the visit between mid-February to mid-march 2018," Ambassador Johnson Weru said in a statement.

Weru said a meeting that had been scheduled on January 10, to exchange views on the visit has been rendered nugatory by the move.

"I call on the leadership of EU parliament and EU commission to take steps to demonstrate that EU is committed to its agreement with its partners. It is my belief that EU with its strong desire to be a key actor in sustaining a rule-based international order, cannot afford to have its agreement with partner states like kenya flouted with such cynical ease," Weru said.

Weru accused the head of observer mission of personalizing and instrumentalising a tool meant to improve electoral management.

"We regret this contemptuous political grandstanding as it has broken with aims and procedures of EU well captured in its MoU with our government,' he said.

Weru said Schaake had in that move escalated a political position she took during the process when she should have demonstrated that EU was a neutral actor.

"Her actions are disdainful and condescending which offend the multilateral understanding of the Cotonou Partnership Agreement. Kenya is a country that has worked hard to build a democracy at a time where reverse is underway," Weru said.