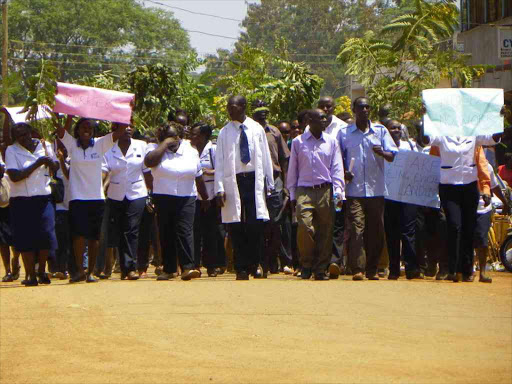 Siaya nurses have threatened to down their tools if their salaries are not paid by close of business on Tuesday,

Sylvester Ng’anda, county secretary of the Kenya National Union of Nurses, noted on Monday that have not been paid for close to nine months.

Ng'anda said they could not continue working in "hardship" yet their colleagues in other counties have received their money.

He said the union held a meeting with the Siaya administration and that it promised to release the pay by last Friday.

The official said that since the money was not wired, the administration has until tomorrow and that the consequence of failure will be industrial action.

"Nurses are undergoing untold suffering ... they cannot pay school fees and rent which has accrued," he told The Star at Siaya County Referral Hospital.

Last year, Cornel Rasanga's Siaya government fired 512 nurses who had been on strike since June 5 and prepared to post job advertisements.

Ng'anda said the county will not receive any other notice and that the strike will be "the mother of all strikes ever witnessed in the region".

He noted their move will be legal even without notice and reiterated that should the county not pay them, all public health facilities will remain closed.

"The county has taken its workers for granted. Other sectors are also suffering because of the trend of paying salaries piecemeal."

He asked other workers to fight for their rights and consider joining them as this would be "wise".