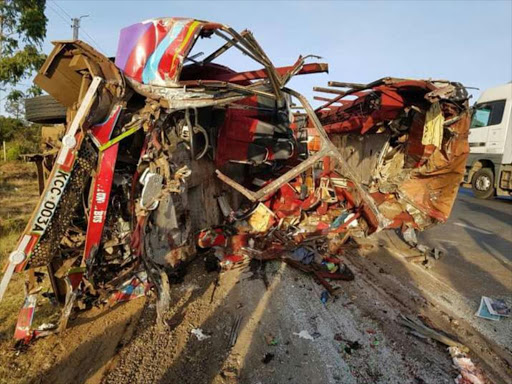 The wreckage of the bus that was involved in accident at Migaa area in Salgaa on Nakuru-Eldoret Highway, December 31, 2017. /Amos Kerich

Kalenjin elders cannot cleanse the Salgaa black spot as the action would not be biblical, a religious leader has said.

There have been claims that spirits haunt drivers in the area following grisly accidents that left at least 330 people dead in December last year.

Nandi Senator Samson Cherargei's is among those who have called for the cleansing.

But Wilson Kurui, who is Uasin Gishu Gospel Ministers chairman, said cleansing should only be done by "men of God and church leaders, not elders".

“We as church leaders are not against Kalenjin traditions but it’s our duty as men of God. As gospel ministers from Uasin Gishu county, we will soon conduct prayers at the Salgaa black spot for these accidents to end,” he said in Eldoret town on Thursday.

“We will cleanse and dedicate the place to the Lord. We want the spirits that are claiming lives at Salgaa and Sachangwan to be defeated in Jesus name. We pray for the accidents to end in Jesus name."

In his address to the press, Kurui noted everybody has the responsibility to pray for God to secure roads.

“It’s not Kalenjins alone who have lost their loved ones at Salgaa, along Eldoret-Nakuru highway, therefore everyone should be involved,” he said.

Kurui asked the Transport ministry and the National Transport and Safety Authority to find alternative routes for tracks since they are the major causes of accidents along the highway.

Truck drivers earlier said they were to blame for the accidents and that not all motorists should be punished through the night travel ban that the authority enforced.

On Thursday, Transport minister James Macharia said disbanding NTSA was not a solution.

But he added: "We thank NTSA for this move but it's too late. Why now yet many people have died in the past one month? Did they want many people to lose their lives before acting?

"The ban could have been effected at the beginning of December. I think NTSA officials are sleeping on their jobs and that all officials must be shown the door to end the accidents menace."