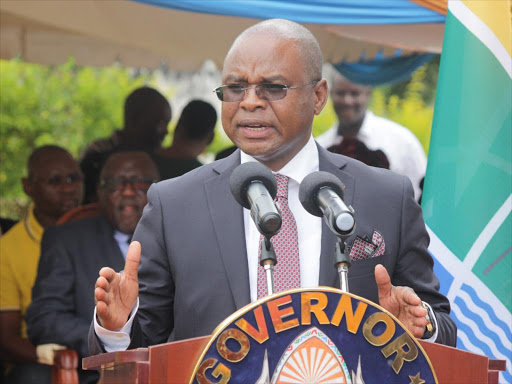 Kilifi governor Amason Kingi during the swearing in ceremony of the county's 10-member executive committee on Thursday, January 4, 2018. /ELIAS YAA

Kilifi governor Amason Kingi has said he is ready to sacrifice his blood if that is what it will take to realise secession of the coast region.

He said during the swearing-in ceremony of the county executive committee members on Thursday that the call for secession is unstoppable.

The governor added that he has shelved his plans to run for the presidency in 2022 to focus on the agenda of making the region autonomous.

Kingi announced that the county will host a convention of leaders from the region to chat the way forward on the plan.

"People will be maimed while others will be threatened but we as leaders must come together to fight for this cause," he said.

"Not everyone would want to see the region get justice. We will be prosecuted and some will be harassed but we must hold together to save our future generations."

The governor, however, pointed that the national government has a window to stop the calls by implementing devolution as spelled out in the new Constitution.

"This government is not keen on implementing devolution as stipulated in the constitution. If you want to ruin your vehicle do not refuel it."

"The national government is killing devolution by failing to release money to counties on time. This is the main reason we want to manage our own affairs as the coast region," he added.

He said the conference will bring on board the clergy, elders, politicians, and the academia to chat the way forward on the matter.

Kilifi North MP Owen Baya said his secession motion will be tabled in Parliament once the August House resumes sittings.

"Whoever thought the motion was dead is wrong as it will be tabled immediately we resume sittings. We have been marginalised for a long time and this must come to an end."

"The only way is to have the region secede and manage its affairs," Baya said.

Rabai MP William Kamoti urged the leaders to come together and come up with a strong coastal party even as they push for secession.