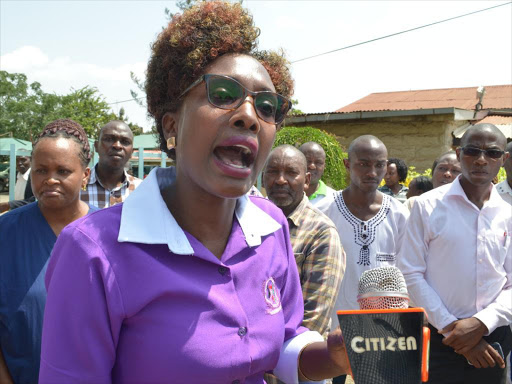 Nurses in Murang'a county have downed their tools demanding that the county pays them for the six months they were on strike last year.

The nurses, who camped outside the county government offices on Wednesday, accused the Mwangi wa Iria administration of failing to remit their statutory deductions.

They said the situation has caused them issues with various financial organisations.

Lucy Wambui, Murang'a's KNUN branch secretary, said the county violated their return-to-work agreement which provided that they be paid for the strike period.

She said they had been experiencing financial challenges due to lack of payment yet nurses in other counties had received their salaries.

Wambui added that the agreement signed in October last year between nurses' unions and the government required all counties to pay nurses.

"Only Murang'a has breached it," she told journalists and dismissed claims by the county that nurses were mistreating patients.

Patients have complained of being frustrated by health officials in public hospitals since the Governor won Jubilee nominations in April 2017.

"The allegations are mere propaganda that is only meant to tarnish their names," Wambui said.

But the Governor said the the nurses will not be paid for the six months they were on strike.

He said the county does not have money to pay people who illegally withdraw their services and caused residents to suffer.

Wa Iria noted hundreds died while other families sold their property to pay for medical services in private hospitals during the strike.

"Nurses who did not go on strike received their regular salaries. The others went to attend to patients at their private clinics and made their money," he added.

Post a comment
WATCH: The latest videos from the Star
by ALICE WAITHERA @Alicewangechi
News
03 January 2018 - 15:00
Read The E-Paper