250 killed in road crashes in one month 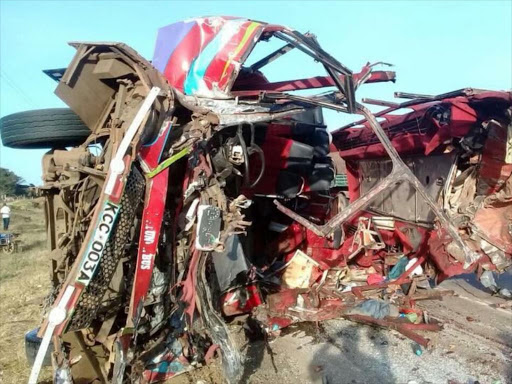 The mangled wreckage of the bus operated by the Nairobi Bus Company in which 36 people died early Sunday after an accident at Migaa along Nakuru-Eldoret highwa. /AMOS KERICH

They had bid farewell and exchanged end-of-year and New Year wishes as they left their various homes for Nairobi.

Each hoped to celebrate New Year with their loved ones and friends back in the capital city and other parts of the country they were destined to.

Instead, the merchant of death intercepted them; some ending up in morgues and others in hospital beds with serious injuries. A child, a student, a parent, a family were entrapped by the depressing fate of many innocent users of Kenya’s killer roads.

Thirty-eight lives were instantly snuffed out early Sunday morning in the worst road accident of 2017 on the Nakuru-Eldoret highway. Six others died from injuries while undergoing treatment in hospitals. The latest deaths brought to 250 the total number of people killed in road accidents across the country in December alone.

Initial investigations indicate that the driver of the bus left his lane and collided head-on with an oncoming trailer at Migaa, about 10 kilometres from the notorious Salgaa black spot at about 3.30am.

Both the driver of the trailer and the bus, owned by the Nairobi Bus Company, died on the spot. Among the dead identified was a three-year-old boy. Eleven passengers were admitted in different conditions at Molo District Hospital and Nakuru Level 5 Hospital.

Most of the passengers were asleep when the accident occurred.

They either died or were reportedly awoken by the impact of the bus crashing into the trailer speeding in the opposite direction.

“I was asleep when the accident occurred and all I heard was a loud bang and screams from all over before I was helped out,” a survivor told reporters from his hospital bed in the Molo District Hospital.

He said most of the dead were seated in the front seats and were thrown off their seats onto the road. Their body parts and personal belongings were strewn along the road in a heart-rending pool of blood streaming down the hill.

Many had travelled upcountry to join their families and relatives for Christmas celebrations and had carried back with them maize, bananas, beans, sugarcane and chickens to cap the month of festivities in the capital.

Red Cross teams backed by police and locals struggled for hours collecting scattered body parts and trying to match them in a terrifying scene.

Most passengers lacked personal documents, making it hard to identify them.

With that, the death toll during the month of December alone hit an all-time high of 242. It means one person died every three hours during last year’s Christmas period.

As public anger soared over the high fatalities, President Uhuru Kenyatta mourned those killed and asked drivers to be careful during this festive season.

He regretted loss of lives in road accidents that can be avoided.

“Let us all be responsible this festive season, and more so, those of us who are driving,” said the President.

The National Transport and Safety Authority reacted with an immediate ban on night travel by long-distance buses.

It was not the first time. The NTSA announced a similar ban in 2016, following a spate of accidents but gave in to pressure by transporters and backtracked.

NTSA Director-General Francis Mejja directed that all long-distance travel be restricted to 6am and 7pm.

“Over the recent past, our records indicate that the majority of crashes are occurring during the night and in order to review the effectiveness of the current measures in place to improve road safety, the authority, in consultation with other relevant government agencies, suspends night travels for all distance public service vehicles from December 31st,” a joint statement with the Police Traffic department read.

Official statistics released by December 26 show that 2,847 people had perished in road accidents compared to 2,914 during the same period in 2016.

Some 11,003 people had been involved in road accidents across the country compared to 12,881 the previous year.

While last year’s road deaths are slightly less than 2013, when 3,130 people perished in road accidents, the high "holiday season" casualties on Kenyan roads is a matter of national concern.

Sunday morning’s horrible accident is the second most tragic in fatalities after the 2013 horrifying death of 41 people on the spot when a bus rolled at Ntulele along the Nairobi-Narok road.

The NTSA yesterday blamed the accident on negligence by the bus driver, who was said to have dozed and veered off the lane.

“Preliminary investigations indicate that the bus left its lane and collided with the oncoming trailer in the extreme left of the climbing lane,” the NTSA said in the joint statement.

The authority, which has been on the spot over fruitless crackdowns on the roads, yesterday announced new regulations it hopes will stem the carnage.

The no-night-travel directive could put pressure on day travel, surge fares and create more crises as schools reopen and people report back to work from tomorrow.]

Matatus usually cash in on rush travel by hiking fares and inconveniencing travellers.

However, in response to the government’s ban on night travel for buses, the Matatu Owners’ Association took issue with the timing of the ban.

“There should have been proper engagement to agree on when the ban would be rolled out,” said MOA chairman Simon Kimutai.

“It is true that most accidents occur at night, but then enough participation is required to set the appropriate time when night buses should be banned.”

“The problem is not the time when buses should ferry passengers but rather the laxity by the NTSA to implement regulations that require two drivers for each bus,” he told the Star.

“Parents and students rely on buses for transport, this policy is ill-advised,” he added.

The NTSA has said investigations attribute the causes of road crashes to risk factors such as speeding, lane indiscipline, reckless driving, and driving under the influence of alcohol and other substances.

Ahead of the festive season, the NTSA and the National Police Service mapped at least 15 black spots along major highways nationwide, where motorists were warned to be careful.

Incidentally, Migaa, the scene of yesterday’s deadliest crash, was among the zoned areas where patrols were supposed to be enhanced as a measure to boost road safety.

Last week, a group of church women held prayers along the road.

Officers from the Ministry of Energy are now fixing lights masts along the 14-kilometre stretch between Kibunja and Salgaa.