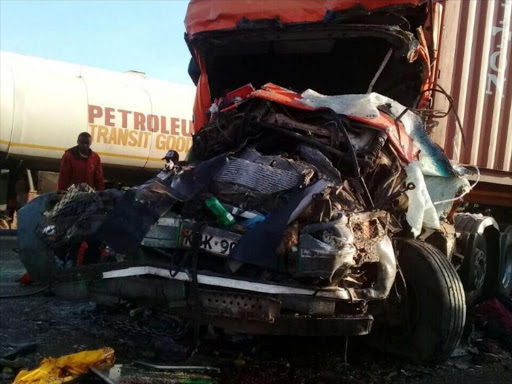 The mangled wreckage of the trailer that collided head-on with the bus at the scene of the accident. /COURTESY

Thirty-six people have perished in yet another grisly road accident at the notorious Salgaa blackspot on Sunday morning after the bus they were travelling in collided head-on with a trailer.

At least 30 died on the spot while six others lost their lives while undergoing treatment at the Nakuru Level Five Hospital and Molo Sub-County Hospital.

Kenya Redcross tweeted that 18 passengers were rushed to the hospital with serious injuries.

“Our ambulance teams responded to the scene and evacuated 18 casualties to Molo and Nakuru hospitals. The accident involved a lorry and a bus. More rescue efforts continue.”

Among the dead are 34 passengers who were aboard the ill-fated bus belonging to Matunda Bus while the other two are the driver of the trailer and his loader.

Preliminary reports said the accident occurred at around 3:30 am after the bus which was travelling from Busia collided with the trailer at Migaa area, some 3 kilometres from the notorious Salgaa on the Nakuru-Eldoret highway.

The bus, which was reportedly speeding, was being driven on the wrong lane.

The latest accident comes just a day after three bishops died on Friday night on the Embu-Makutano road after their saloon car collided head-on with another vehicle.

The accident brings to well over 200 the number of people who have lost their lives in road accidents in the month of December.

NTSA is considering converting the 20km stretch between Sachangwan and Salgaa to a dual carriageway to minimize the unending accidents along the stretch.

In 2017, the spate of crashes started on March 11 when a Siaya county vehicle rammed into a stationary trailer at a parking bay killing three people.

Rift Valley provincial traffic boss Ziro Arome said the driver of the car had been speeding and lost control when he reached the bay.

Two of the victims were pedestrians who were hit as they walked by the roadside.

The third victim was the driver of the trailer who was knocked down as he supervised a tyre repair.

On November 1, four people died after a trailer travelling from Eldoret hit several vehicles near the Salgaa blackspot.

The speeding vehicle rammed several vehicles after it hit a bump and lost control in the 6 pm accident.​

Several other people sustained serious injuries in the accident that involved five other trailers.

Slightly over three weeks later on November 19, 12 people perished in another grisly road accident near Salgaa after a Nakuru-bound Great Rift shuttle collided with a trailer.

Witnesses said the driver lost control after hitting a cow and veered off his lane into an oncoming trailer.

All the 11 passengers aboard the matatu and its driver died on the spot while the driver of the trailer and a passenger sustained serious injuries.

Barely a week later on November 24, a bus driver died while ten passengers were injured after the bus collided with a trailer.

travelling from Eldoret to Nairobi.

Two other accidents within the proximity of the notorious stretch had previously happened at Makutano Junction near Eldama Ravine and at Kamara near Sachangwan.

The accident at Makutano claimed five lives in the 9 pm accident while the one at Kamara claimed the lives of six members of a Kalenjin music band.

NTSA is considering building a dual carriageway between Salgaa and Sachangwan to minimize the accidents which are mainly head-on collisions.

Post a comment
WATCH: The latest videos from the Star
by EMMANUEL WANJALA, RITA DAMARY AND AMOS KERICH
News
31 December 2017 - 09:00
Read The E-Paper