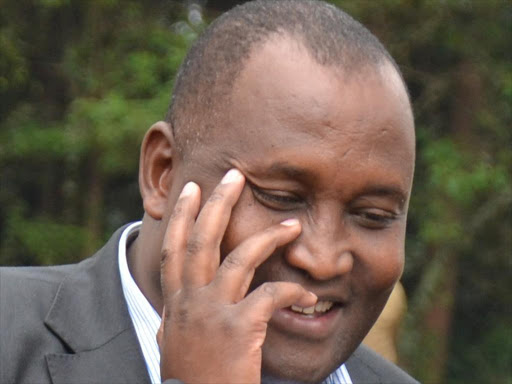 2017 was a tough year for Kenya as we said goodbye to some of our best known and well-loved figures.

The year that was shadowed with the elections left many people dead and among them are prominent politicians.

He died at Thika Level 5 Hospital following a grisly on November 7.

Gakuru, 51, was reportedly travelling to Nairobi for an interview when his vehicle was

involved in a road accident near Kabati on the Thika-Muranga highway.

Bishop Korir of the Eldoret Catholic Diocese died at his house on October 30 aged 67.

He is particularly remembered for housing more than 7,000 victims of the 2007/8 post election violence victims.

He ventured into difficult areas during the clashes to preach peace and reconcile communities.

The acting ICT director was found dead on July 31 in a forest in Kikuyu constituency.

Msando was one of the few people with knowledge on the whereabouts of the IEBC servers.

He reported death threats to the Central police station days before his body was found dumped in a thicket.

Prof Juma died on December 15 barely a week after his mother was buried.

He is one of Kenya's foremost recognised professors and was also the first African Science and Environmental journalists at the Daily Nation newspaper.

Juma is an internationally recognised authority in the application of science and technology to sustainable development worldwide.

The Nyeri MCA (Ruguru ward) died on December 12 as he was being treated at Outspan hospital.

Speaker John Kagucia said Weru felt dizzy as he was addressing a gathering during the Jamhuri Day celebrations at Nduduini primary school in Mathira constituency and was rushed to hospital.

Nyenze, 60, died on December 6 after a long battle with colon cancer — a disease that caused his lungs to weaken, resulting in a pneumonia infection during campaigns for the August 8 election.

The widow of the late former minister

after a road accident in Muhoroni.

Christabel and four others were on their way from the swearing-in ceremony of Governor Anyang' Nyong'o at Kenyatta Sports Ground, Kisumu.

A postmortem revealed he died from a heart attack. He was 67 years old and was one of the core persons engaged in the preparations of the August 8 general election.

The former TJRC chairman after a long illness

at the Nairobi Hospital.

He served as the chairman of the Truth, Justice and Reconciliation Commission (TJRC) from 2009 to November 2010.

This was before he resigned to pave way for investigation into past human rights abuses.

The late Laikipia senator at Nairobi Hospital aged 78. Leaders hailed him as man who lived true to his word and did not hesitate to speak his mind on matters of the nations' interest.

He represented Keiyo South in the National Assembly for 28 years.

pancreatic cancer, an illness that

saw him admitted in the UK for two months in 2015.

died in a South African hospital on September 28.

She succumbed to injuries she suffered during an attack by al Shabaab on July 14 in Milihoi, Lamu.

The Senator died on February 12 after a short illness.

Boy is said to have been taken to a Mombasa hospital after falling sick.

He was later transferred to Aga Khan Hospital in Nairobi where he died aged 57.

Janet Kanini after a battle with lung cancer.

Last year in February, the presenter

said she was cancer free.

The former Finance minister died at Karen Hospital in Nairobi on April 13 after a long battle with cancer.