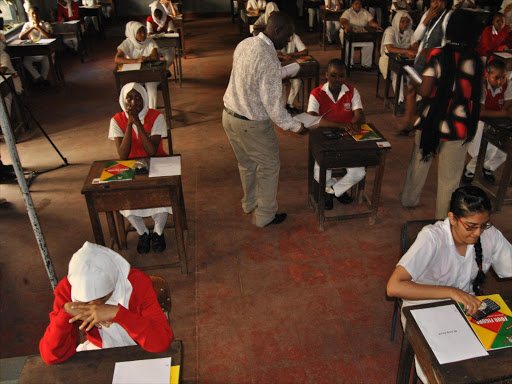 The new 2-6-3-3-3 curriculum that will replace the 32-year-old 8-4-4 system will be rolled out in January amid cries by teacher unions that the program is being rushed.

Education CS Fred Matiang’i has maintained that there was sufficient stakeholder consultation on the changes adding that the launch cannot be delayed.

This will be the second time the country will be adopting a new curriculum since the 1985 change-over from the 7-4-2-3 system.

This model comprised 7 years of primary education, 4 years of lower secondary, 2 years of upper secondary (form 5-6) and 3 years for a university course.

The system was phased out because it was deemed unsuitable for the changing aspirations of Kenyans and the labour market which was slowly beginning to embrace technology.

The programme laid emphasis on academics as opposed to orienting learners for employment. It also failed to cater for the critical pre-primary level of schooling for children under six years.

The 8-4-4 system was adopted to seal those gaps but the curriculum soon came under criticism for churning out school leavers suited only for white-collar jobs.

The argument has been that the curriculum neglected the sectors which accelerate economic growth such as agriculture, construction, and fishing.

An influx of white-collar job trainees over time created a skills imbalance in the job market, resulting in one of Kenya’s biggest obstacles to development – youth unemployment, which currently stands at 40 per cent.

This ignited the desire by the government to include Technical Vocational Education and Training (TVET) as a key component of Vision 2030.

The 8-4-4 system has also been criticised for being too expensive, broad and burdensome to learners with the latter being largely blamed for causing strikes in schools.

Even then, the system is credited for streamlining university enrolment by creating a level playing ground for both the poor and the rich.

Previously, the rich would send their children to foreign universities after O-level leaving those from humble backgrounds to tackle Form 5 and 6 for university admission.

The new curriculum has been touted as the ultimate remedy to limitations identified in the 8-4-4 system because it is entirely skills-based.

It was piloted this year between May and September across 470 schools – 10 in each county.

Learners will not sit exams but they will be evaluated through Continuous Assessment Tests (CATs) on the skills acquired as opposed to cramming for exams as has been the case.

Experts are of the view that it will enable learners to develop beyond academics and also focus on how best they can use their specific talents to make a living.

The needs of special needs children have also been incorporated in the curriculum which will integrate ICT at all levels of education.

The 2-6-3-3-3 model places emphasis on formative years of learning where learners will spend a total of eight years - 2 in pre-primary and six in primary.

Subjects to be taught in lower primary are Kiswahili, English, literacy, and mother tongue as well as science, social studies and agricultural activities.

Others are social studies (citizenship, geography and history) with an option of a foreign language (French, German, Chinese and Arabic).

Learners at this level will also be required to take a minimum of one and a maximum of two optional subjects that suit their career choices, personalities, abilities and interests.

Learners at senior secondary (ages 15-17) will focus on three areas of specialization depending on their skills, talents and interests.

These are arts and sports science, social sciences and Science, Technology, Engineering and Mathematics (STEM).

Graduates from this level will have the option to join vocational training centres or pursue university education for three years.

However, the new curriculum will require heavy spending to equip teachers with the necessary skills and tools.

This is because learning will mostly incorporate practical sessions as opposed to oral teaching.

Teacher shortage will also take a heavy toll on most schools considering one teacher will only be required to handle a small group of pupils.

The deficit stood at 87,000 teachers at the beginning of this year while the Teachers Service Commission said in June it was hiring only 5,000 new teachers.

TSC CEO Nancy Macharia said in a public notice that some 2,205 of the teachers would be deployed to primary schools while 2,795 would be sent to secondary schools, leaving the deficit at 82,000 teachers.

Currently, TSC has an annual budget of about Sh200 billion for the slightly over 300,000 teachers on its payroll.

The commission was allocated Sh2 billion in the current financial year to hire new teachers.

Teachers unions demanded that TSC must hire more than 90,000 teachers if the current deficit is to be addressed and an expected student influx in January handled effectively.

Infrastructure also remains a major challenge that needs to be addressed even as the Education ministry said in May it had allocated Sh6 billion towards that venture.

Infrastructural development is vital because the government intends to achieve 100 per cent primary-secondary transition at the onset of Free Secondary Education in January.