2017: The year of high number of road crashes 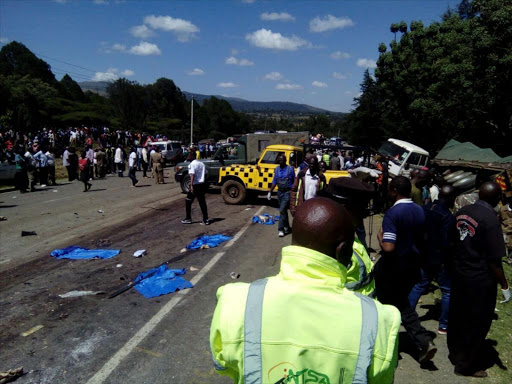 Police and Sachangwan residents at the scene of an accident that left at least 60 dead, December 12, 2017. /AMOS KERICH

Kenya loses an average of 3,000 lives through road accidents annually, placing it among countries with the highest road carnage globally.

As a result, the government, through various players, has tried to put mechanisms in place to reduce these incidents.

This started in 2014 with the introduction and publication of the Legal Notice No. 23 in the Kenya Gazette which outlines guidelines on management of public service vehicles.

The legal notice spells guidelines for night travel, a requirement that PSVs form saccos, and for long-distance trucks to be fitted with a fleet management systems.

It also states that PSV operators employ staff on contract and bold display the names of the Saccos or companies which their vehicles are registered.

These measures were aimed at making the PSV operators can take full control of their businesses, a move that NTSA said will instil discipline in the sector.

However, the recent happenings where dozens of people have been killed and scores injured leaves a lot to desire on whether the regulations helped.

Most notable in 2017 was the accident involving Nyeri Governor Wahome Gakuru who died on November 17 after a guard rail sliced through his official car near Kenol, Murang'a county.

Two days later, 17 people perished in another grisly road accident at the Sachangwan black spot, a day after 20 others died at Kamukuywa bridge in Bungoma county.

NTSA’s director general Francis Meja, when the transport regulator released a report which showed that at least 90 people died within 72 hours, described the situation as worrying.

He said December alone had claimed more lives compared to other months.

In contrast, at least 71 people died in similar circumstances between January and November 28 on sections between Nakuru and Eldoret alone.

Comedian Emmanuel Makori Nyambane, popularly known as Ayeiya Poa Poa, died in April after his car hit a pole near the Catholic University of Eastern Africa on Magadi Road.

Emerging trends indicate that motor vehicles hired for social functions are the ones that are largely involved in fatal accidents.

The Transport ministry said these vehicles are not only contravening the licenced routes, but are also overloaded and speed to reach these functions on time.

The situation is further complicated as the drivers are not familiar with the new routes.

The ministry further said it had observed an increase in the number of pedestrians involved in the crashes particularly on Sundays.

This was attributed to the large number of people moving around to attend social activities.

For motorbikes, NTSA says 213 lives have been lost.

The authority said majority of the road crash victims comprised of the youth aged between the 20 and 44 years.

It further stated that 1,919 people had died in road accidents since January 2017.

According to the agency, there was a reduction in the number of road users who lost their lives as compared to a similar period last year where 2,078 deaths were reported.

Pedestrians' deaths registered a slight decline at 714 from 766 in 2016: Some 647 were reported to have suffered slight injuries down from 1,015 last year.

About 483 passengers lost their lives while 1,236 passengers sustained serious injuries. At least 2,587 passengers were reported to have suffered slight injuries.

The regulator further reported that 320 boda-boda riders by then had lost their lives while 376 were reported as having sustained serious injuries.

According to the authority, in the same period, 154 boda-boda passengers perished on the roads as compared to 149 recorded during the same period in 2016.

About 36 pedal cyclists also lost their lives though the number was down from 50 during the same period in the previous year.

NTSA said 71 persons lost their lives between 26th July and 1st August 2017, compared to the same period last year where 45 lives were lost.

This translated to an increase of 58 per cent.

The number of serious injuries stood at 96, compared to last year when 79 were reported.

Notably, the authority said 91 per cent of the crashes were as a result of human related factors.

The crashes were attributed to speeding, reckless driving, dangerous overtaking, drink driving among other issues.