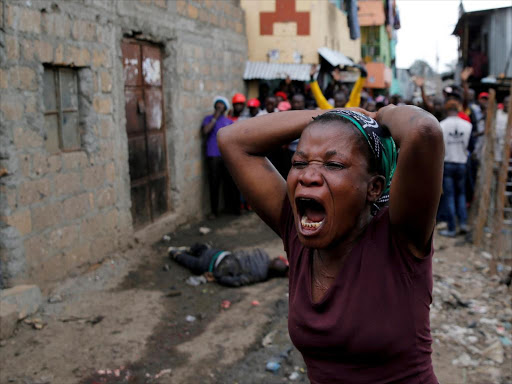 A woman gestures as she mourns the death of a protester in Mathare, in Nairobi, Kenya, August 9, 2017. /REUTERS

Ninety-two people were killed by police and civilians in the aftermath of the August and October elections, KNCHR has said.

The rights group said 26 were killed after the October repeat election, 20 by unknown people and six by police.

Some 111 of the victims were tortured and injured after the October 26 repeat election.

KNCHR says persons killed, injured or tortured were not necessarily in streets protesting but were raided in their homes.

The report found 37 cases of property destroyed estimated to be worth Sh22 million, while 64 bribery cases were recorded between August and now.

It recorded 85 cases of misuse of public resources by government officials.

The commission recommends that IPOA investigate deaths and grievous harm on citizens by police.

It also asks DPP Keriako Tobiko to order for thorough investigations and prosecute perpetrators of killings and brutality.

Inspector General of Police Joseph Boinnet has also been asked to investigate the killings, injuries, acts of torture and destruction of property during the election period.

The commission urges politicians and citizens to champion national unity and healing after the poll.

KNCHR plans to conduct further investigations from 2018 for victims of elections violence to get justice through courts.

The report dubbed 'They Were Men in Uniform: Sexual Violence against Women and Girls in Kenya's 2017 Election' includes accounts from 71 rape victims: 68 female and three male.

"Many said that they were raped vaginally and anally, that they were penetrated with objects, or that dirt was inserted into their private parts. Some were raped in the presence of family members, including young children," the report says.

IEBC said it is developing a framework to curb gender based violence during elections.

Soon after President Uhuru Kenyatta was declared winner of the nullified August 8 presidential election, spontaneous violence erupted in parts of the country.

A number of women say they were sexually assaulted and raped, but some of the victims failed to report to authorities for fear of reprisal.

There was outcry from the public about how police officers handled women during the protests.