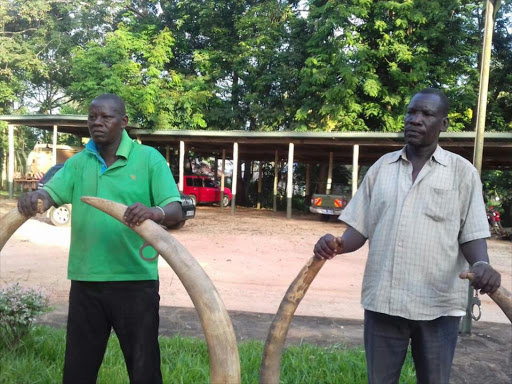 Two men arrested on Friday with ivory worth Sh4 million are government officials, it has emerged.

Said Kuzidi, a school teacher at Mwamasa Primary School, was arrested with 34 kilogrammes of ivory at Mtsangatamu, Matuga subcounty.

Hamisi Makoti, a county enforcement officer, was arrested with 16 kilogrammes of ivory in Tiribe.

KWS deputy warden Nathan Gatundu said the suspects are currently at Kwale police station and will be arraigned on Monday.

"This means two elephants lost their lives. Replacing them will be difficult," Nathan said.

The KWS official added that the ivory was not fresh saying the suspects had sought a buyer by the time of their arrest.