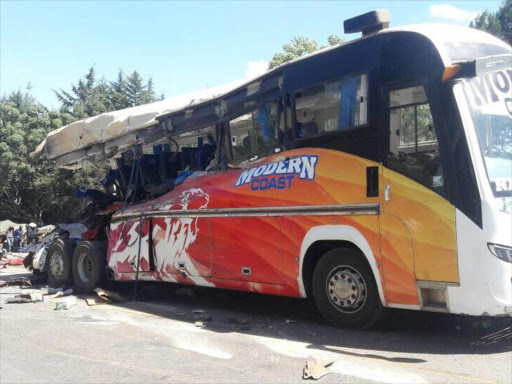 A Modern Coast bus involved in the accident at Sachangwan, December 12, 2017. /COURTESY

More than 15 people are feared dead after a multiple vehicle crash at Sachagwan on the Eldoret-Nakuru highway on Tuesday.

The 12pm accident involved 15 vehicles including a trailer, a Modern Coast bus, a Great Rift Valley matatu and a private car.

It took place less than 100 metres away from an NTSA road block.

The wreckage of one of the 15 vehicles involved in accident in Sachangwan, December 12, 2017. /AMOS KERICH

Debris lies on the road after an accident involving four vehicles at Sachangwan. /COURTESY

The exact number of causalities and fatalities could not be immediately established by The Star but they have been rushed to Molo subcounty hospital and Nakuru county referral hospital.

Witnesses described the incident with graphic details, saying they spotted tens of dead bodies at the scene.

A Great Rift Valley matatu and a trailer lie by the roadside after a multiple vehicle accident at Sachangwan. /COURTESY

Philip Kirui, a witness, said the trailer's brakes failed causing it to crash into other vehicles.

The trailer driver was reportedly being pursued by transport authority officials from Nakuru.

The highway was barricaded for several hours and road users were diverted to Molo town.

Police and St John's Ambulance officials are clearing the scene.

One of the cars involved in the Sachangwan accident. /COURTESY

Last weekend DP William Ruto's wife Rachel held prayers in the area after two musicians died in another accident on the highway.

Tuesday's accident is the

third to occur in under 24 hours.

The wreckage of a vehicle being towed from the accident scene in Sachangwan, December 12, 2017. /AMOS KERICH

Four other people died in two separate accidents in