Politics is over, let's work together for Kenyans - Uhuru 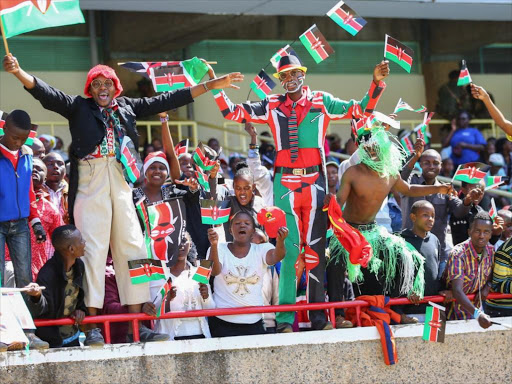 President Uhuru Kenyatta has warned Kenyans against using unconstitutional means to air grievances, saying such individuals will be dealt with accordingly.

He also said he is committed to working with leaders from across the political divide for the country's benefit.

“I am ready to work with all Kenyans and all leaders for us to be able to ensure we have a country where every Kenyan is happy to be Kenyan regardless of their tribe or religion.

“Politics are over and now we embark on developmental plans and I ask all leaders to come so we can reason together on behalf of the Kenyans who have elected us,” Uhuru said during Jamhuri day celebrations in Kasarani stadium.

He said anything outside the constitution is a "hostile intrusion".

“Today I serve notice to those treating our constitutional order with casual recklessness that the constitution is the general will of all (and) no one including myself is above it.

“No matter who you are you are subject to its authority. Anything outside the constitution is a hostile intrusion.”

The president said it is everyone’s duty to preserve the country’s nationhood regardless of their political affiliation.

“There will be a fifth, a sixth and even a tenth president, but there wil never be a second, third or fourth Kenya,” Uhuru said.

The warning comes after NASA leader Raila Odinga postponed plans to have himself sworn in as people's president.

There have been increasing calls for dialogue between the two.

Uhuru's also asked drivers to be extra careful on the roads to minimize road accidents that have in recent days claimed several lives.

His plea came hours after more than 30 people lost their lives in in Bungoma, Machakos and Sachwangwan.

“Please let us be cautions on our roads especially during this festive season. Let us realize especially those drivers of public transport that you are not carrying cabbage you are carrying the lives of people,” Uhuru said.

The head of state said his administration will endear itself to fostering the country’s economy based on four main issues which emerged as the country’s main concerns during the campaign period.

“We should not accept poverty as our fate. I will dedicate my time and energy to this big four.

Uhuru said manufacturing will help create jobs and compete fairly with imports from other countries.

“We will focus on creating jobs in the manufacturing sector to make products that are as good as any other in the world.”

The president ordered the Kenya Revenue Authority to destroy on site contraband goods found in the country which he said were killing local manufacturers.

“Any officer found engaging in the counterfeit goods will face the full force of the law.”

“We will review our work permit regime and encourage expatriates whose skills support the big four,’ he added.

The president also said SMEs will be supported and given subsidies to enbble them realize maximum benefits and profits.

On housing, Uhuru said his government will seek to ensure at least half a million more Kenyans become new home owners Kenyans by 2022.

“Owning a decent home is a dream for every Kenyan and we have to make that dream come true.

“Under our plan, for the same amount of money you pay rent today, you should and will be able to own your own home.”

The president said this will be realized through the reduction of the cost of mortgages, use of innovative materials to cut construction costs and by raising low cost funds from private and public sector for investment in large scale housing construction.

On healthcare, the president said his administration will embark on providing medical cover for all Kenyans by 2022.

He said this will be achieved among other ways the collaboration of the NHIF and private sector health insurance providers to reduce the cost of healthcare in the country.

“That shall entail major policy and administrative reforms in the medical sector,” Uhuru said.

He spoke during his address to the nation this year’s Jamuhuri Day celebrations at the Kasarani stadium.

The president said in as much as the countery has made major strides towards food security, a lot needs to be achieved.

He said time has come to address the issues that have left many Kenyans at the mercy of hunger every time drought strikes.

The head of state said large scale farmers will be facilitated through subsidies on farm inputs to boost their annual yields though irrigation and modern farming technology.

“Small scale farmers will receive better extension services and subsidies will be redesigned to improve food yields and production quality.

The president said the ministries of Agriculture and irrigation will publish the terms and conditions by which commercial farmers will be able to lease agricultural farms owned by the government in order to raise the production of strategic crops.