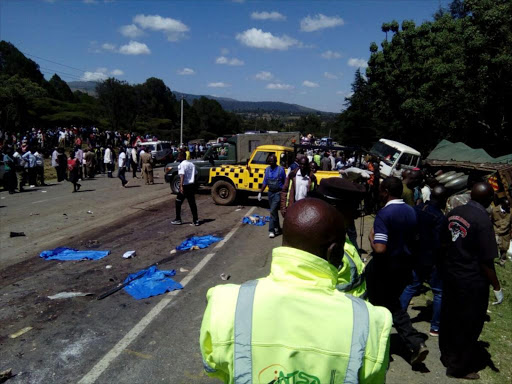 NTSA officials and residents at the scene of a multiple vehicle accident in Sachangwan, December 12, 2017. /AMOS KERICH

NTSA has refuted claims that is officers are to blame for the Sachangwan accident that killed more than 32 people.

Director general Francis Meja on Tuesday said his officers are being crucified for their diligent work.

It was said that NTSA officers were pursuing the driver of a trailer that lost control resulting in an accident that involved 15 vehicles.

The driver reportedly refused to stop at a roadblock before the trailer's brakes failed.

The 12pm accident involved a Modern Coast bus, a Great Rift Valley matatu and a private car among other vehicles.

Meja said were it not for NTSA officers the number of fatality would be worse.

He said one of the officers tried to control oncoming vehicles by directing them off the road.

"But unfortunately those coming from the other direction suffered most as a result of a corner just few metres from the accident scene."

"If you look at the distance where our vehicles were stationed at that time, it is just 500 metres and there is no way the truck would have gained such momentum ... We therefore ask the public to stop such speculations," Meja added.

He said, "It would be horrible to crucify officers who are diligently doing their work without verifying the information. Just because our fleet was few meters to the scene it should not be perceived that it was pursuing the truck".

Meja said Salgaa remains a notorious black spot in the country and have asked police to beef up their capacity at the area.

"In a week's time a tender to correct and improve the road will be out," the director added.

He said there will be a separation grid so that vehicles ascending will not be in contact with those descending.

Meja said meanwhile there will be two NTSA patrol cars to keep vigil at the area as other deliberations go on.

He said behavioral issues of indiscipline and bad attitude are the main challenges the Authority is grappling with amid efforts to reduce road carnage.

"If only our drivers can adopt some discipline principles, we shall not be losing people on roads due top careless driving," he said.

He said though investigations have been launched, preliminary reports indicates the driver of the track was drunk and was overwhelmed as he tried to negotiate a corner.

In less than 24 hours, more than 50 people have died in three accidents.

Nineteen people from one family died in a multiple car crash in Mfupi bridge, Bungoma, while four others died in two separate accidents in Machakos county.