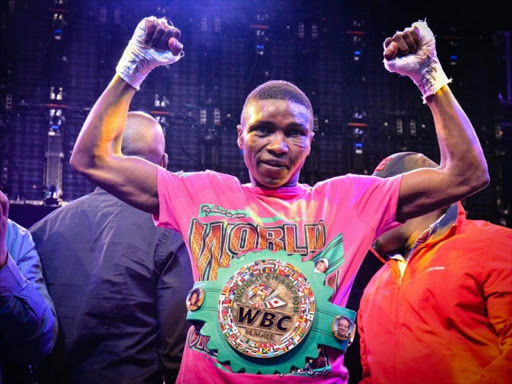 Any one who has ever watched Laila Ali in the ring can attest to her magnetism, her talent and her brutal power. As the youngest daughter of the great Muhammad Ali, it was no surprise that she dominated the sport. She was enthralling to watch move across the ring, her legs almost a blur as she dodged her opponents, her fists flying, hard and fast, her face focused on one goal – to win. She was beautiful to witness and was an inspiration to many many women.

One of these is Kenya’s Fatuma Zarika who one fateful day, was captivated by Ali. She saw someone strong and powerful and decided that she would do that. She would become a great boxer.

Fatuma, born Zarika Njeri was born in Kenya on the 13th of March in 1985 to parents of modest means. After her mother died, she moved to Mathare North and had to fend for herself from a young age.

But one day, a young girl living in the slums watched a boxing legend. She watched a woman just like her punch her opponents to submission and her life was changed. She joined the Mathare 4A gym under coach Oksimba and began to train.

“I started as an amateur in 2000 after leaving school and enrolled at Mathare Club” She told WBAN, “However during that year, I fought four times and lost only once.”

Only a year later, she joined the professional ranks and was signed by Kuya, a former Kenyan international.

at the Muscle Heath gym with her coach Edgar Sentongo. / Philip Kamakya.

It was onwards and upwards for Zarika as for the next few years she went head to head with a number of women winning all her matches except for one against the undefeated Conjestina Achieng where she fought to a four round draw.

In 2005, Zarika had her first fight abroad when she travelled to Aarhus, Denmark to face the former amateur Swedish star Frida Walberg for the WIBF intercontinental Junior lightweight title. It was a tough fight for Zarika during which Walberg used her left jab and right hook to get the upper hand. Although Zarika countered well, it was the first boxing match that she lost in her professional career.

That match was marred with some controversy after Walberg alleged that Zarika had bitten her on the collarbone twice during the match – a move that resulted in her getting recognized as the “dirtiest fighter of the year” for 2005.

But still she persevered. On home turf, Zarika continued to dominate the sport knocking out Agnes Adonga in November 2005 and winning a second round TKO over Monalisa Sibanda of Zimbabwe. The latter of which she was not expected to win as Monalisa had fought against Conjestina in the middleweight class.

On December 20, 2008, in a controversial move, Zarika won a 10-round unanimous decision over Belinda Laracuente of the United States for the WIBF Super Bantamweight title. However, her then trainer Julius Odhiambo praised the boxer telling WBAN,

“We have yet to see such a talented female boxer. She has good footwork, quick jabs and she does not let down her guard. She is a very intelligent boxer and knows when to feign, when to lunge and when to unleash that killer punch.

“Unlike other women boxers at Pal Pal gym, Zarika works out with men and she trades blow for blow with the likes of David Kiilu, Joseph Miyumo, John Nguru, among others during sparring sessions”

Then on the first of October 2016, Zarika made history when she became the first Kenyan to win the WBC world title stealing the title from Jamaican Alicia Ashley after a split decision at the Dort Event center in Flint. This win also meant that she was the second Kenyan woman to win a world title after Sarah Atieno who won the UBO Super featherlight championship.

This year the WBC world super bantamweight championship was held in Kenya. Sponsored by SportPesa and held at Carnivore grounds in Nairobi, the event gave Fatuma “Iron Fist” Zarika, as she has come to be known, a chance to hold on to her previous title. This time on home turf.

Zarika faced Zambian Catherine Phiri in a match that left spectators on the edge of their seat as the two women battled for the title. Many had assumed that Phiri hot off her win against Tanzanian Flora Machela in July would take the match. Zarika’s supporters while cheering her on were understandably tense when in the fifth round Phiri landed an uppercut that left Zarika bloodied.

Despite this, Zarika rallied and in a flurry of jab after jab, the crowd cheering her on, she persevered and came out the victor of the 10 round contest. Zarika won the brutal bout on unanimous points decision after she scored 97-92, 98-91 and 99-92 from the three international judges who presided over the fight.

“I’m happy to retain this belt, this win is an inspiration that hard work pays in the end,” Zarika, who was quickly whisked away by fight promoters; Bigger Than Life Entertainment following her triumph stated.

Beaten Phiri, who nonetheless gave a credible account of her talent, hinted at vying for a WBC crown next year before magnanimously tipping her hat off for Zarika, whom she acknowledged was superior on the day.

“I believe I gave my best in the ring. We were all interested in the belt but at the end of the day only one person has to go with it home,” Phiri, who stepped up a weight division to fight Zarika, told.

Zarika cited her victory was down to the tactics she perfected during her two month training in Las Vegas, US.

She was grateful to bout promoter, Bigger Than Life Entertainment, for organising her successful title defence and setting the bar high.

“From the whole set up at Carnivore, you could tell things were done professionally. We played in a state-of-the-art ring, the bouts attracted fans and sponsors, the entertainment was class and the purse money was fair enough. We rarely see things like these done by our local promoters,” said Zarika.

Fatuma Zarika pictured at Jomo Kenyatta International Airport on Tuesday, November 21, 2017 on her return from the United States of America. PHOTO/SPN

Africa’s number one sports betting platform, SportPesa, is currently the Official Sponsor of the National Boxing League in a deal that is set to run for three years. It is the first time in Kenya that a corporate sponsor has come up to partner with the federation and this will ensure growth of the sport.

Among the biggest beneficiaries are the amateur boxers in Kenya who will be keen to uptake the sport. There had been a huge decline in the interest of the sport primarily due to poor financing and lack of facilities and this is set to change.

The Ministry of Sports gave the pledge to invest in boxing with a similar amount of Kshs. 20 Million having been encouraged by SportPesa’s interest in choosing to invest in nurturing & growing boxing in the country.

The money that will be provided by SportPesa will definitely ensure that boxing in Kenya will rise again and we will see new champions in the near future.

Sportpesa remains committed to developing sports in Kenya and will work in partnership with the Ministry of Sports to ensure that Kenya exploits its sporting potential & growth of all sports from the grassroots to international representation levels.

Cheque presentation when Sportpesa launched a 3 year partnership worth Kshs. 20 Million with the Boxing Association of Kenya. Photo /SPN