Elders should retire from politics before collapsing, says Ruto 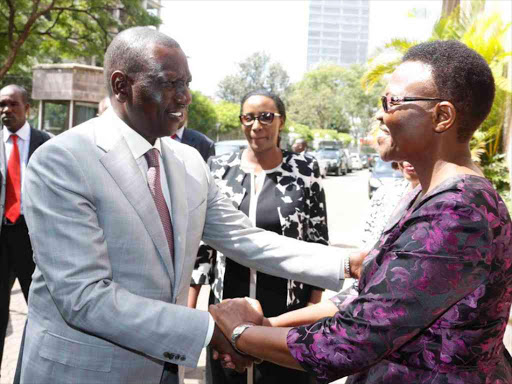 Deputy President William Ruto has encouraged "elders in politics" to retire instead of "waiting to collapse".

Ruto did not name anyone in his address on Tuesday but he and President Uhuru Kenyatta have, in the past, asked veteran Opposition leader Raila Odinga to get off the political scene.

Raila told them he will only do so once he is satisfied that Kenyans are in good hands.

elders should not work until they can't do it anymore.

"I take this opportunity to tell our elders that retirement is a good thing. You don't have to work until you collapse or fall," he said in an address to journalists in Nairobi on Tuesday.

"it's good to retire when you can still sit, watch and see what you have contributed and how others want to do it."

senior government officials have developed an appetite for many advisers who do not add value.

"Some officials hav more than five advisers at a go and the same advisers have some other advisers," he said.

He said public servants who require advisers don't know what they are doing and should go home.

Raila launched a scathing attack on Uhuru and Ruto for saying he is old and should retire.

This translates to: "That Raila is old...whoever is saying Raila is old...look at a person and his policies. I won't retire because [Deputy President William] Ruto said I should. I will when I decide to."

he will quit politics not because the Jubilee Party leaders have asked him to but after uniting Kenyans and leading them to the 'promised land'.