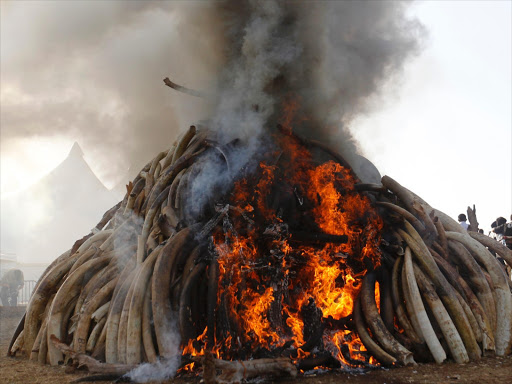 Poaching has sharply declined in Kenya amid focus on countries with booming markets for ivory products, such as the United Kingdom.

Statistics obtained from the Kenya Wildlife Service by the Star on Thursday revealed that 47 elephants have been killed this year, compared to the 86 in 2016.

Seven rhinos have been poached this year compared to 10 killed in 2016.

The decline comes a few days before conservationists, led by Elephant Neighbors Center Executive Director Jim Nyamu, embark on the historic elephant walk in Britain, that will be flagged off on Saturday.

The walk that will start on December 3 will see the 'Ivory belongs to elephants' team take campaigns from London to Bristol.

Its aim is to stop illegal trade in the UK and encourage that country to join nations such as US and China in supporting the Africa Elephants Action Plan.

The Plan is fully owned and managed by the African Elephant Range States,

and outlines actions that must be taken to effectively conserve elephants in Africa across their range.

of Wild Fauna and Flora.

Kenya Wildlife Service personnel pile up some of the 105 tonnes of ivory at Nairobi National Park ahead of its torching, April 30, 2016. /JACK OWUOR

A recent survey by wildlife monitoring network - Traffic - found that in 2016, 3,200 ivory items were put up for sale in London shops and another 2,008 pieces in online markets.

is an engagement in UK between media and residents, where MPs discuss how to end the trade but they have a problem because they have been using this ivory before.

Addressing the press at KWS headquarters yesterday, Nyamu said open markets for ivory still exist and that more could arise.

He said their discussion in the UK is on whether to include the ivory that has been there for many years and the pre-convention ivory.

'Evil people are those wearing ivory'

Nyamu thanked KWS for an amnesty for people to voluntarily give up worked ivory for destruction.

Kenya set alight 105 metric tons of ivory on April 30 last year - its stockpile of confiscated and recovered tusks. It was the largest amount of ivory ever destroyed at one time, representing 6,000 to 7,000 dead elephants.

Nyamu said the Mayor of London will flag off the walk together with the high commissioner and other dignitaries such as UK’s environment minister.

Sixteen members of parliament are set to take part in the walk, he said.

UK plans to hold an international meeting which will bring all African head of states together ahead of CITES meeting in 2019.

Nyamu said 30 per cent of China’s ivory industry has closed down following the announcement of the country's intention to close the once booming industry.

“We are connecting the trade with the poaching which happens all over. But some countries such as UK and China and other places enjoy the trade," he said, adding that the evil person is not the poacher but someone wearing the ivory.

A special unit of wildlife rangers demonstrate an anti-poaching exercise ahead of the Giants Club Summit of African leaders at Ol Pejeta conservancy near the town of Nanyuki, Laikipia County, Kenya, April 28, 2016. /REUTERS

A recent survey estimates that around 20,000 African elephants are killed by poachers every year.

The estimates equates to around 55 elephants being killed every day, that is one every 25 minutes.

Nyamu, who will leave for the UK this evening, said poachers, according to economic studies, takes Sh10,000 to kill elephants, but when ivory goes to the market, it is sold for more than $200.

He said thousands of trinkets, ornaments, musical instruments and household goods are sold each year in UK's antique stalls, action houses and online, stimulating the trade and fueling the demand.

"We want to stop the trade. The moment this happens, there will be no motivation to kill elephants."

Packing of messages a factor to consider

Nyamu said the way messages are being packaged has also made matters worse.

“I saw this morning some poachers were arrested in Chogoria with 58 kilogrammes of ivory, valued at several millions of shillings. This message is going to the poor and innocent who go blindly to poach, motivated by the value," he said, adding that there is no intrinsic value for ivory.

KWS rangers from Mt Kenya National Park, Chogoria, pounced on three suspected poachers and impounded 14 pieces of ivory said to be worth about Sh5.8 million in the black market.

Nyamu said the Kenyan flag will be raised in Bristol town on December 12 and that he will later receive the MTN excellence award.

"We will also be marketing Kenya as a premier destination," he said.