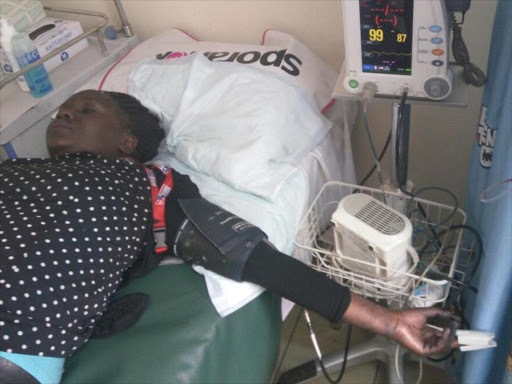 Standard photojournalist Bevalyne Musili in a hospital bed after she was injured in clashes between police and residents in Kariobangi, November 19, 2017. /COURTESY

A photojournalist was injured during confrontations between police and residents in Kariobangi on Sunday morning.

Bevalyne Musili of Standard Media Group was taking photos atop the company vehicle when the driver lost control after a tear gas canister was fired inside.

"We are at the hospital right now with her ... the driver panicked and lost control," a colleague said.

Police fired teargas to disperse a crowd that was protesting against the murder of five people in Riverside area.

Despite reinforcements, police are unable to access the area.

Two vehicles were torched on Outer Ring road in retaliatory attacks and the section was impassable earlier on.

Police spokesperson Japhet Koome said the killings were not ethnically instigated but were criminal acts.

"We went there and found those bodies with injuries," he told a news conference.